These days, the newest rage seems to be for established visual artists to enter the ranks of film directing. Robert Longo recently released his debut feature Johnny Mnemonic and it's reported that Julian Schnabel is currently working on a film project about his deceased colleague Jean-Michel Basquiat. Search and Destroy represents hyperrealist painter David Salle's first foray into filmmaking, following an art career shaped by drastic swings between public lionization and critical opprobrium. It is unlikely that Search and Destroy will engender much heartfelt reaction from either end of the spectrum. The movie is an offbeat black comedy with edgy noir eruptions that, despite many wonderful bits and pieces of dialogue, staging, and performances, never fully coalesce into a unified whole. Salle's foremost achievement with this project may be the impressive assemblage of creative talent he managed to gather together. Search and Destroy originally came to life in the early Nineties as an off-Broadway play by Howard Korder. The play was adapted for the screen by the under-appreciated filmmaker Michael Almereyda (Twister, Nadja). Salle's art-collector pal Dennis Hopper signed on for the film project and Martin Scorsese, who reportedly saw the film as something of a cousin to his own After Hours, came aboard as executive producer. Griffin Dunne, who essayed the story's lead character of Martin Mirkheim in the off-Broadway run (and also starred in After Hours), recreated the character for the screen. Mirkheim is a failed-but-always-trying entrepreneur and a wannabe film producer. Martin has sundered so many enterprises that even the IRS is having trouble keeping account of his failures. His new dream is to produce a movie based on an uplifting adventure novel by late-night TV self-help guru, Dr. Luther Waxling (Hopper, in a brilliant embodiment of a self-serving huckster). When Martin's lack of cash proves a turn-off to the good doctor, Martin turns for help to Waxling's assistant Marie (Douglas), who aspires to sell her unproduced horror screenplay about a “spine sucker” that looks like “a gangrene penis with a lobster claw” and a heroine who is “a fully realized, multi-dimensional character with huge breasts.” Martin and Marie go to New York to get some fast cash through the contacts of a business acquaintance played by Walken. Walken here creates another one of his creepy characterizations of a dangerously borderline personality who, in turn, introduces Martin to an even wonkier character played by John Turturro. Two scenes between Walken, Turturro, and Dunne -- one staged in a tailor's fitting room with a three-way mirror and the other on an in-home squash court -- are so outrageously performed and shot, that they, by themselves, make the entire movie worthwhile and probably come the closest to manifesting Salle's visual style on film. Watching Walken and Turturro each trying to out-crazy the other is an oddsmakers' bout between two well-matched loons. Actually, all the film's performances are finely etched and enjoyable to watch. The story's dark center about the nature of business as the provider of hope for the hopeless is sardonically witty and sharp. But the movie's constant shifts in tone and undeveloped angles prove frustrating. Search and Destroy doesn't zero in on its target so much as it camouflages the perimeter. 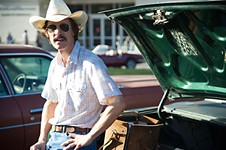