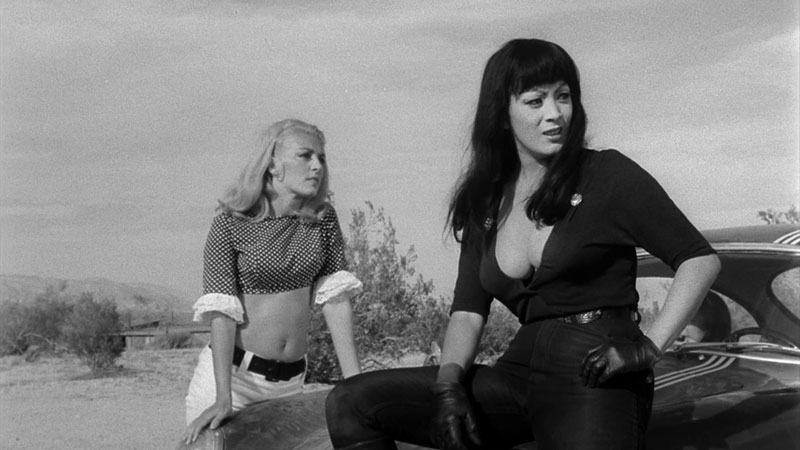 Faster, Pussycat! Kill! Kill! is proof that with a great title, you can sell just about anything. For the so-called "King of the Nudies,"; Faster, Pussycat! Kill! Kill! is fairly tame stuff. Though the movie's combined décolletage is abundant and ample, as befitting Meyer's signature visual style, these heroines remain fully clad and as buttoned up as possible throughout. What's unusual about this Meyer soft porn movie is its nasty tone. Though Meyer is widely recognized for bringing the innovation of narrative structure to the soft-porn film industry, Faster, Pussycat! does not have what you'd call a profusion of storytelling structure. Mostly, the film is a vehicle for having three bosomy women race around in three separate sports cars and occasionally get out and whoop the hell out of whatever icky men have crossed their path. These pussycats are clawed tigresses, beating up on men for the sheer pleasure of it. This 1966 movie is like some Sixties Strom Thurmond nightmare about emancipated women run amok. Though I'm told these homicidal bosom buddies have developed a bit of a cult following in some women's circles, I've always felt that Faster, Pussycat! suffered from an absence of Meyer's usual creative flourishes. The director's distinctive editing style, so commonplace today but so unusual for its time, is scarcely apparent in this movie. Also, Meyer's films tend to share a ribald and genuinely funny sense of humor that here gets usurped by a mean and nasty impulse that tends to block out the humor and exaggeration. New 35mm prints have been struck for this current re-release of Faster, Pussycat!, and, on the big screen, some of the eye makeup and décolletage are not to be believed. (For more on the movie, see article on p. 42.) 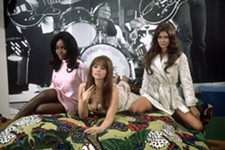 Beyond the Valley of the Dolls
... Wild Gals of the Naked West
...