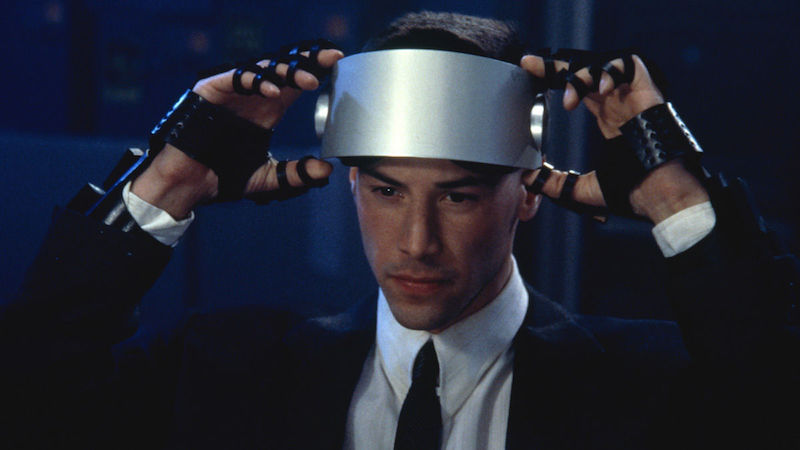 From controversial artist Robert Longo comes his film debut based on William Gibson's short story (Gibson also wrote the screenplay) about the perils of cyberspace in the 21st century. Reeves is Johnny, a mnemonic courier (that is, a person with a cranial implant which enables the uploading and downloading of sensitive information from computer to brain, and vice versa) on the run from the vicious Yakuza with only 24 hours to download 300-odd gigabytes of precious information before it kills him. The information turns out to be the blueprint for the cure to NAS, a sort of global-wide plague that destroys the human nervous system and is afflicting humanity at a rapid rate. Teaming up with the LoTeks -- a rebel band fighting a guerrilla war against the current corrupt government -- and a NAS-carrying female bodyguard (Meyer), Johnny must fend off the ever-increasing attacks from the Yakuza and their henchmen while desperately trying to locate an avenue of release for the information overload in his head. Fans of Gibson's grim cyberpunk writings will no doubt flock to the film in droves, but Johnny Mnemonic also works fairly well for those of us trapped in the Stuckey's alongside the gridlocked information superhighway. Take away all of Gibson's technophobic grime and Longo's crazed, cluttered set pieces, and you've basically got an updated D.O.A., with Reeves filling in for Edmond O'Brien (in a version that's vastly superior to Rocky Morton and Annabel Jankel's cheesy San Marcos-lensed yawn-fest of 1988). For his first shot at feature filmmaking, Longo does an admirable job of keeping the story line rocketing along, though his seeming attempts to out-Blade Runner Ridley Scott in the decaying cityscape department grow wearisome and the occasional wooden drivel that Reeves spouts adds a bit of unintentional humor to the proceedings. All in all, it's much better than expected, and almost certainly a notch or two above the upcoming The Net, whose current theatrical previews curiously make it out to be The Pelican Brief with more technospeak and less Grisham.