Before The Perez Family winds to its close, you may find yourself happily volunteering for honorary membership in their clan. The ever-expanding Perez family cluster attracts newcomers at a steady clip and instead of collapsing from the additional weight, the group evolves and accommodates the changes. The movie, much like the family it portrays, is a joyous melange of characters, moods, and plot developments. Some of its structural elements work better than others but even at its weakest points, the film manages to delight. Like another recent film, Don Juan DeMarco, The Perez Family's unevenness detracts little from the film's magisterial faith in the power of love. The story begins as two Cuban immigrants meet during the last boat lift to America in 1980. The two couldn't be more different. Juan Raul Perez (Molina) has spent the last 20 years in a Cuban prison for burning up his sugar-cane fields instead of handing them over to Castro's forces. His wife (Huston) and daughter (Alvarado) have been in Miami all these years waiting for his release. Dottie Perez (Tomei) is a vivacious young sugar-cane worker and prostitute who is a natural-born survivor. She fights for her dreams, even when the outlook may seem bleak, which is how she proposes that Juan Raul pose as her husband in order to increase her chances for American sponsorship. Juan Raul is in a daze, in between the realities of his 20-year confinement and the search for his wife and daughter. Meanwhile, his wife, who has dutifully waited for him, is mistakenly informed that her husband is still imprisoned in Cuba. From this skeleton set-up, the story twists and turns while picking up more Perez family attachments as it goes. Throughout, the film maintains a remarkable tone, bobbing smoothly amongst comedy, heartache, and joy. Also, the film pulses with the rhythms of Miami's Little Havana and the camerawork is bathed in a warm, tropical glow. (Cinematographer Stuart Dryburgh has also shot Once Were Warriors and The Piano.) Most of all, The Perez Family seems a signature film by director Mira Nair (Salaam Bombay! and the aptly named Mississippi Masala). Indian-born and Harvard-educated, Nair makes some of the most non-Caucasian movies of anyone working in America. Her characters come to the melting pot from all sorts of places and join together in a blending of cultures. Location can even be a state of mind, as Juan Raul discovers when he realizes that his thinking is still locked in a cell in Cuba even though his body comports freely in the United States. In order to claim his future, he must learn to let go of his past. As the character of Juan Raul, Molina attains the right mixture of gentle honor and baffled stupefaction. For her part, Huston inhabits the soul of the wife who, after long years of comfort drawn from the familiarity of waiting, discovers the potential for a life based on new and different comforts. Huston's performance is marvelous and anchors the movie. The other characters are spotty, however. Tomei gives the part her all, but there is some level at which you always think that she's just play-acting. Other characters are less fortunate. Juan Raul's brother, Angel, is all bluster and noise. Celia Cruz plays an even less well developed character, a mystical curandera, who seems thrown in only for spice. Despite these dramatic glitches, The Perez Family has a warm, generous charm that invites you to make yourself at home in its company. 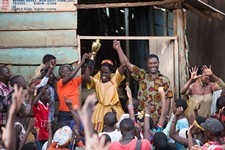