When I was in school, I never minded contracting minor childhood illnesses, for it meant I would end up snuggled into blankets and pillows on the couch, fortified with Saltines and ginger ale, eagerly awaiting the TV “movie matinee.” My favorites were the British movies of the Thirties and Forties, both the silly portraits of bucolic manor life and the darkly humorous class satires. It seemed to me, even then, that these were a people who had a genius -- in a low-key way -- for making much ado about nothing. Though the Welsh would bristle at being cast into the same lot as the English, they share this genius. Perhaps it is because in such a tiny country, with such tiny villages where so many share the same surname and where nearly everyone knows everything about one another, local events are reduced to a nearly microscopic level. That is to say, they are magnified to about 2,000 times their normal importance. Every incident, no matter how mundane, merits extraordinary attention. That trait, combined with a fierce patriotism for a country which has struggled to maintain its own cultural identity, requires that the inhabitants of the village Ffynnon Garw make a mountain out of a hill. Which, of course, is the subject of The Englishman Who Went Up a Hill But Came Down a Mountain, a gentle comedy based on a true story passed down to the film's director and writer by his grandfather. Rich in lush Welsh landscape and eccentric characters, Monger's Englishman provides a look, both sweet and sly, at a place most people only know of through Dylan Thomas or Richard Burton. Hugh Grant shines as the reluctant hero and fits perfectly into the World War I era, and though I suppose that someday I might tire of his fumbling charm, that day has not yet come. His shy, innocent Anson is a perfect foil for the conniving patriots, and the movie achieves it best moments when the two seemingly contradictory forces collide. The picture's deadpan humor and quiet romance is marred by a too-loud, overly dramatic score and some serious pacing problems, but nearly redeems itself with a hilarious ending. Contrary to its ad campaign, this is no Four Weddings and a Funeral and will, no doubt, suffer from the comparison. But if you occasionally crave the cool taste of a pint of bitter and think fondly of those old-fashioned British movies, you might be content spending an evening in Ffynnon Garw. 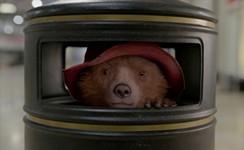