Ride for Your Life

“Don't just sit there!” hypes the poster for Ride for Your Life, the second production from Interfilm, which follows up their last, poorly received interactive venture Mr. Payback. As with that aforementioned picture, the supposed novelty here is that the audience, via a joystick attached to the theatre chair, is able to “control” the actions and decisions of the characters onscreen. Unfortunately, it's difficult to be interested in actually making those decisions when the characters (a couple of competitive bike couriers) are extremely thin, and the plot is an incomprehensible and inane mess dealing with alien invasion, an evil corporation run by Adam West, and a bike race that will determine the fate of the world. In short, who really wants to play God with some third-rate excuse for a movie that probably wouldn't survive as a glorified video game for 25¢ a pop, let alone as an “interactive moviegoing experience” for $3 a pop? (In a particularly crass move, the poster promises, “It gets better every time you play it!”) Essentially a cross between CD-ROM video games and William Castle's gimmick pictures of the 1950s, Ride for Your Life lacks the complex choices of the former and the cheap thrills of the latter. It's neither fish nor fowl -- not exactly a video game and hardly a movie -- but, rather, a half-hearted attempt to be both at once and, in the process, fails to meet the criteria of either. So, unless the idea of choosing characters' bike directions on the big screen sounds irresistible to you, steer clear of Ride for Your Life. Kudos, though, go to the anarchistic audience with whom I saw the film, whose boredom prompted them to gleefully allow aliens to take over the earth. 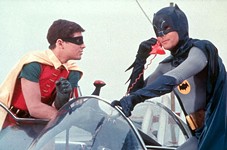 Batman: The Movie
The camp humor of the Sixties TV series is extended into a feature-length format. ...