Who am I? Such a simple question, yet its answer is so elusive. These two films are very different -- one is a brooding tale of lost teens in industrial Australia, the other a wry documentary about a well-bred Harvard coed -- but both turn on questions of identity and how one's sense of self can be consumed by environment. Only the Brave centers on Alex and Vicki, two teenage girls in blue-collar Melbourne whose strong spirits and artistic aspirations are deadened by their rigid, oppressive world. Alex is obsessed with the mother who left her years before and confused over her attraction to women, especially a teacher who's been encouraging her to write. Does Alex want a mother? A lover? Is she a lesbian? A writer? Or just a punk setting fire to hedges and getting stoned in the railyard? Kokkinos poses these hard questions in abbreviated, harsh scenes, sometimes beautifully shot but with jagged edges, like the shards of a shattered stained glass window. And like the window, the film has a disjointed quality, as if scenes or dialogue or something essential were missing. This and the film's unrelentingly bleak tone ultimately numb us almost as much as their world numbs Alex and Vicki. Playing the Part makes a stronger emotional connection, in part because of its lighter tone but also because filmmaker McCabe offers more complexity in showing how one's world shapes identity. The film turns on McCabe's desire to tell her wealthy, conservative, Grosse Pointe parents that she's a lesbian. To illustrate the difficulty of this, McCabe provides a detailed family history, complete with old photos and footage of the family manse. In these scenes and the offhandedly funny narration with them, we develop a keen sense of the people and places that have shaped McCabe's life, of tradition, order, propriety. We see McCabe's obvious affection for the life of her childhood and the echoes of her grandmother and mother that live on in her. Her unwillingness to abandon her past to establish her own identity makes this modest look at that perplexingly simple question surprisingly affecting.Only the Brave: 2.5Playing the Part: 3.0 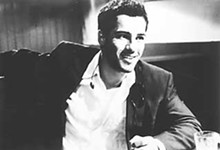 Head On
As the woefully conflicted young Greek-Australian Ari, the feral, dynamic Dimitriades is less a teenage house o' fire than a self-made neutron bomb: He may ...