And the Earth Did Not Swallow Him

In each of our lives, there comes a time when we develop a keen sense of death's presence. Often, it comes in our youth and is tied to our idea of the forces beyond earthly life, those with power over life and death. Spirits. God. The Devil. If it comes at a certain age, when we are taking our first step beyond childhood and just acquiring a sense of our place in the world, at the bloom of independent thought, then we may even defy the deities of death. In this film by Severo Perez, based on Tomás Rivera's seminal semi-autobiographical novel …y no se lo tragó tierra, Marcos Gonzales feels death brush his sleeve in his twelfth year. His brother dies in Korea, a friend is shot by a farmer while they work in his fields, a man kills himself over love, his mother's best friend falls to illness, a stranger is murdered by a malicious couple with whom he stays briefly. These passings press on him and lead him to doubt, even to challenge God. Marcos' experience is universal, and I expect few viewers will have trouble relating to it. But the setting is distinct: the world of Chicano migrant workers. Marcos' family lives in Crystal City, Texas, but every year they go north to harvest crops wherever they can. Without dwelling on grim conditions, Perez conveys the misery and frustrations of this existence. We see just enough of the chicken coops in which they are housed, the fierce sun over seas of crops, the hard rides in truck beds to grasp the pain and injustice such families endure. It was partly the power of his vision of migrant family life that won Rivera acclaim for his novel, and it's a tribute to Perez that he translates this to the screen. He also gets onscreen the book's loose structure, a mosaic of vignettes, roughly chronological but sometimes seemingly unrelated. Combined with a measured, almost deliberate pace and honest but low-key performances, the film seems at times to be going nowhere and in no hurry. But the patient viewer may find himself eventually lulled into the film's rhythm, that of a South Texas summer afternoon spent in the arms of a tree, where memories blow over one like the hot, dry wind and reveal to you your place on the long, flat horizon. 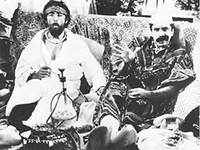 Cheech & Chong’s Nice Dreams
The boys drive an ice cream truck that fronts for another kind of drug delivery system. Read over this cast list, though. ...