The less said about this, the better. The bane of high-brow comedians everywhere stars in yet another tired, unfunny, sophomoric vehicle playing basically the same character he's been playing since Encino Man (and, perhaps, before… sometimes it's hard to tell where the character begins and Shore leaves off). Here, Shore is Tommy Collins, an umemployed, socially stunted misfit who ends up serving jury duty during the trial of accused psychopath Carl Bishop (Sean Whalen). While Tommy tries to prolong the court case and jury deliberations (the longer the trial, the longer he can stay sequestered in a ritzy hotel courtesy of the State of California), fellow jurors, including quasi-love interest and budding legal-eagle Monica (Carerre), want him (predictably, it seems) dead. I should have been tipped off when I noticed that Jury Duty's script was penned by Neil Tolkin, whose previous credits include the Corey Haim nightmare License to Drive and the more recent, only-slightly-less-alarming Richie Rich. Shore's comedic abilities haven't changed much in the years since his big-screen debut; he's still playing down to his audience while at the same time keeping them convinced he's laughing with them, not at them. He is, in fact, doing exactly the opposite, which makes my eyes water at the best of times, and occasionally gets me thinking about just how much cultural damage MTV may really be responsible for. (Shore, of course, got his big break on the network years ago.) As for Jury Duty, it's a tired rehashing of bad court jokes that also manages -- in an extremely repellent manner -- to cash in on the notoriety of the already over-hyped Simpson case. Cheers to Pauly Shore, though, for proving beyond a shadow of a doubt that mankind did indeed evolve from single-celled, amorphous lumps of unfunny goo. 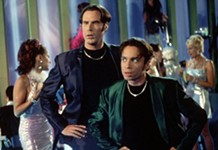 A Night at the Roxbury
Like all movie fans, I'm awed by Hollywood's relentless Napoleonic obsession with making movies of all known Saturday Night Live skits. And unlike many, I ...