“There's a lot to be said for those big soft girls,” remarks one character in Circle of Friends. Indeed there is, especially if they're played by newcomers such as Minnie Driver, who brings a fresh beauty and disarming frankness to the lead female role of Benny Hogan in this Pat O'Connor (The January Man, Cal) adaptation of Maeve Binchy's 1990 novel. Andrew Davies' screenplay, by all accounts, is faithful to Binchy's tale of three girls from Knockglen, Ireland, coming of age in the late 1950s. Set predominantly at University College in Dublin as the three childhood friends enter their first year, Circle of Friends tells the predictable but nonetheless enchanting tale of friendship, secrets, and sex familiar to anyone who's survived puberty. Benny longs to fall in love, which is equally a longing to escape the confines of Knockglen and the ever-vigilant and eternally repugnant Sean Walsh (Cummings), heir-apparent to the menswear store owned by Benny's father. Cummings' portrayal is a tribute to the villains of the silent cinema; the audience in the theatre practically hissed at all of his appearances onscreen. Along with love interest Jack Foley (O'Donnell), Benny's circle of friends includes Eve Malone (O'Rawe) and Nan Mahon (Burrows). Theirs is a common friendship, filled both with large doses of loyalty and a smidgen of backstabbing. As the heartily Catholic girls grow into questioning, Catholic young women, the issue of virginity becomes their biggest dilemma: Will their bodies become “gardens for Jesus” or “vessels for sin”? O'Connor's instincts for telling this tale cinematically are right on target, but the story itself contains some cloying moments. However, Driver's fine performance carries the story in its most overwrought scenes. Ken MacMillan's sumptuous camerawork makes the most of Ireland's rolling hills, cobbled streets, and ruddy faces. Circle of Friends relates a common story with uncommonly engaging acting by Driver. As Benny, she nudges the film out of its few valleys of smarm, making Circle of Friends a heartfelt love letter to circles of friends everywhere. 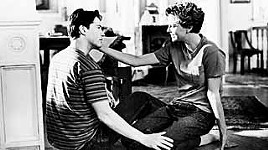 Sweet November
Get out your handkerchiefs. No, scratch that -- get out a pair of windshield wipers and staple them to your brow. Perhaps they'll obscure the ...