Saturday morning, popcorn, forbidden soda, and a theatre only partially filled with squirming kids -- I'm here for my son. Even as a child, I hated Goofy, the character. In Walt Disney cartoons he was usually given long “comic” interludes with which he incompetently interacted with animate and inanimate objects. His own cartoons themselves were usually mini-symphonies of Goofy's war with the world, his bumbling incompetence matched with good-natured persistence and the character-establishing laugh. These were to be avoided as they were beyond dull but hit some rhythm amounting to mental torture. As a sidekick to Mickey and Donald, he was fine, though I dreaded the preposterous little Goofy interludes sure to be socked in as much as I hated Harpo Marx's inevitable harp solo. This film, which actually should be titled Son of Goofy, turns out to be a new Goofy. As director Lima says, “Instead of just keeping Goofy one-dimensional as he's been in the past, we wanted to give an emotional side that would add to the emotional arc of the story. We wanted the audience to see his feelings instead of just his antics.” He's talking about Goofy, Mickey Mouse's pal. The movie appears to have forgotten that; instead, it is an adolescent angst drama about his son Max's ambivalent feelings about having Goofy as a dad. Max feels like an unnoticed nerd at school and in order to break out he imitates rock star Powerline at a speech by the principal. This wins him all the other students' love and affection but, convinced Max is in a gang, Goofy drags him off on a cross country trip, recreating one he took with his dad years ago. There are a few comic moments but I'm hard pressed to think of them. This is a story about a boy and a dad, and a boy and first love. What mental giant decided this was a Goofy story that needed to be made? It has no audience that I can think of; boys old enough to be interested in the romance don't go to Goofy cartoons and children young enough to enjoy Goofy will find this too character-driven, plotted, and slow-paced. Instead, rent Tiny Toons Summer Vacation, a twisted frenetic film both young and old can enjoy. If A Goofy Movie was one-fifth as demented as Tiny Toons, it might have been worth watching. Instead it is bland, a barely television-length cartoon stretched out to fill a feature, and not much fun. 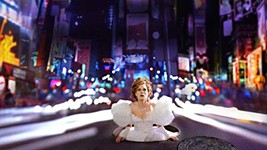