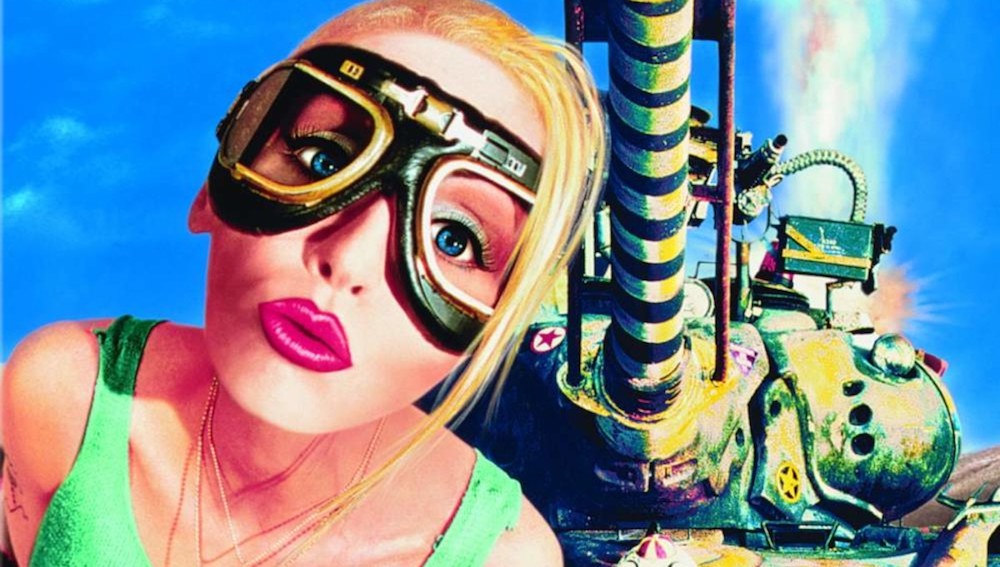 A glorious, spastic mess. Jamie Hewlett and Alan Martin's neo-underground cult comic book Tank Girl comes to life looking, amazingly, exactly like it ought to, positively overflowing with an ever-changing riot of color, gratuitous violence, inter-species shagging, toss-away one-liners, and gobs of little wonky bits that will either knock you upside the funny bone or leave you reeling from out-of-it confusion. More than Batman, more than The Crow, Rachel Talalay's Tank Girl plays like a comic book of a film of a comic book; indeed, it's hard to pinpoint where the comic strip ends and the film begins. (Talalay's use of comic book art and full-scale animation as segues inspired by the Batman TV show has a lot to do with this odd feeling of media disorientation.) Set in the year 2033, Lori Petty is the titular Riot Grrrl Rebecca Buck, a gooney, obnoxious, and thoroughly lovable young woman who wants nothing more than to scare up some precious water for her mates in this post-apocalyptic, water-free world. Malcolm McDowell (who seems to be following the same career path as Dennis Hopper these days), as the head of the evil Water & Power consortium, has other plans (natch). He enslaves Rebecca and her remaining friends and puts them to work ferreting out the mysterious “Rippers,” mutant kangaroos responsible for a number of guerrilla search-and-destroy missions against the corrupt W&P facilities. With the aid of likewise-imprisoned pal Jet (Watts), Rebecca manages to escape and steal a colossal tank, and suddenly it's Tank Girl and Jet Girl against the world, or something like that. It's a very silly, immensely entertaining 100-plus minutes that calls to mind everything from Mad Max to Star Wars, Flash Gordon to Buckaroo Banzai: That is to say, it doesn't always make as much sense as it should, but you get the feeling the filmmakers were having way too much fun to care. Costume designer Arianne Phillips (The Crow) works wonders in bringing Hewlett's designs to the screen, and Petty, well, Lori Petty is Tank Girl. Behind all this seeming nonsense, though, is an admirable feminist message of self-empowerment and rugged individualism -- something even Camille Paglia could endorse without wincing. What can you say about a movie that combines Busby Berkeley chorus lines with killer mutant kangaroos and the wildest female action hero this side of La Femme Nikita? What can't you say?