If the thought of another Australian film with a soundtrack full of ABBA songs scares you away from this film, buck up and see it anyway. From the first introduction to Muriel in a leopard-print dress at a staid wedding, her character charms with a combination of ungainly grace and underappreciated beauty. Muriel's Wedding tells the story of 18-year-old Muriel Heslop (Collette), an exuberant and zaftig young woman stuck in Porpoise Spit, a resort town presided over by her philandering councilmember father Bill (Hunter) and the rest of her lackluster family. Muriel's one true goal in life is to be a bride. This is a different thing than wanting to be someone's wife; Muriel hasn't thought that part through. She wants the pomp and circumstance of a wedding in which she stars as the blushing, beautiful bride. Above all, Muriel wants to feel as “in” as her obnoxious, shallow friends from high school. When these friends go away on vacation together and don't include Muriel, she goes anyway. Once on vacation, though (unwittingly paid for by her parents, who think she's embarking on a career in makeup sales), Muriel meets up with an old high-school classmate, Rhonda (Griffiths). Rhonda is unlike Muriel in that she doesn't give a damn about fitting in. With Rhonda's friendship and encouragement, Muriel moves with her to Sydney and begins to build a life while constantly planning her dream wedding. Muriel's Wedding is a bumpy ride through one young woman's struggle to achieve her goal and the eventual realization that it may have been the wrong one. Segmented into three acts by introductory title cards, the story features enough raucous humor and startling tragedy to create a fairly uneven film. When this imbalance threatens to undermine the film, Toni Collette's performance usually provides enough of a distraction. Collette's portrayal of Muriel is refreshingly candid; she makes no apologies for Muriel's often misguided life choices. Apparently she was the only actress willing to gain weight for the role. Thankfully there are no weight-loss montage sequences; what you see with Muriel is what you get, like it or not. This refusal to change or convert the main characters makes the film so appealing. Instead of tying up the story into a neat package, the joyous ending is also tinged with the reality of a morning after. A frequently used promotional photo for Muriel's Wedding shows Collette as Muriel in full wedding regalia, her beauty as luminous as Grace Kelly's. This gracefulness is then undercut by Muriel's facial expression: Her features are distorted by a rowdy laugh most surely accompanied by an unfeminine snort. This image sums up the film. One part beauty and one part vulgar excess make Muriel's Wedding an exuberant, if uneven, comedy. 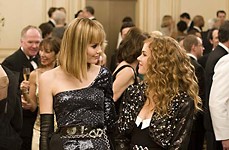