Tolerance is the main theme of this fascinating new film from Cuba. The story tracks the development of an improbable friendship between two Cuban men, a friendship colored by the politics of their time. Diego (Perugorria) is a an artist and a freethinker. He is also gay. David (Cruz) is a student and a party member. He's just been jilted by his girlfriend and, thus, still a virgin. From the moment Diego spots David eating ice cream at an outdoor cafe, he sets out to reel in the handsome young student. To paraphrase another movie: One orders strawberry, the other doesn't. Diego comes on to the leery David with conversation of forbidden art and literature and invites him home to see more. Diego's home is a veritable storehouse of Cuban culture and artifacts, all unknown to the well-schooled Marxist. Both intrigued and repulsed by Diego, David returns for frequent visits, rationalizing to himself that he is collecting information about David's counter-revolutionary activities. A friendship also forms with Diego's vivacious but suicidal neighbor Nancy (Ibarra). Diego introduces David to works by people like Maria Callas, John Donne, and various Cuban artists and plies him with contraband American whiskey and china teacups. Over the course of time, the two men become comfortable with each other's sexuality and confess their ulterior motives to each other. Toward the end of Strawberry and Chocolate, things get a bit too sentimental and forced, but the movie never wavers in its depiction of the ways in which politics affects every aspect of our lives, including our friendships and our romantic choices. Gutiérrez Alea (Memories of Underdevelopment) is one of Cuba's foremost filmmakers (Juan Carlos Tabio stepped in a co-director when Gutiérrez Alea become ill during shooting). Strawberry and Chocolate is the first Cuban movie in decades to receive a widespread international release, a fact that only makes its subject matter more curious. Tame by American standards, the movie is a box-office sensation in Cuba where its irreverence, no doubt, appeals to the general populace. The subject matter also makes it possible for the Cuban government to present itself in a more positive international light as a promoter of tolerance. Strawberry and Chocolate is beautifully shot and features excellent performances, but its credo of peace, love, and understanding plays a bit too simplistically on these shores. 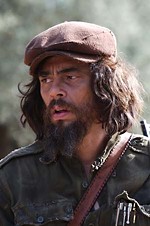 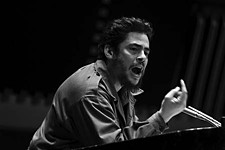 Che: Part One
Steven Soderbergh’s filmmaking legacy is his aesthetic daring, and his latest – as massive and imperfect as it is – just might be his most daring work to date.