If you've seen the trailer for Man of the House, you have seen the best parts of the movie. And even that's not saying much. Writer/director Orr, whose previous screenwriting credits include Sister Act 2 and Three Men and a Baby, attempts to meld Chevy Chase's comedic timing with a story from the child's point of view about the difficulties of divorce and remarriage. Unfortunately, Chase seems better suited to pratfalls than semi-serious family issues. A subplot involving inept, vengeful mobsters adds to the film's unevenness. Chase plays Jack Sturges, a U.S. attorney engaged to single mother Sandra Archer (Fawcett). When Sandy asks Jack to move in to the loft she shares with her 12-year-old son Ben (Thomas) in downtown Seattle, Ben embarks on a campaign to oust Jack from the loft and from his and Sandy's lives. Interestingly enough, Fawcett is absent from the most recent previews for Man of the House. While her role is barely one-dimensional, she does an admirable job in trying to flesh out Sandra Archer: mom, divorcee, artist, and fiancée. Although Fawcett has done television work over the past few years, this role marks her return to film after an almost 10-year hiatus. Thomas is probably the best thing about this movie. Known for his television role as Randy, the middle son on Home Improvement, Thomas turns in a realistic and unaffected performance as the conflicted son who wants his mom to be happy but doesn't want to lose her to a man who may abandon them as his father did once before. Director Orr commented that, to him, this film is about two men fighting over territory (I think he's referring to an intangible space rather than Fawcett's character). However, watching Chase try to break new acting ground in the territory of a family picture isn't worth the fight. 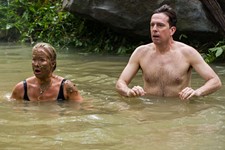 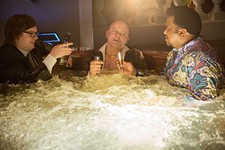 Hot Tub Time Machine 2
It's the franchise that goes back to the future – but in a hot tub instead of a DeLorean.