Minbo -- Or the Gentle Art of Japanese Extortion

Far removed from the glamorized vision of the Japanese mob, or yakuza, as seen in stateside action films like Black Rain, Japanese filmmaker Juzo Itami (Tampopo, A Taxing Woman) deromanticizes the yakuza myth in this gutsy 1992 movie. Minbo portrays not the stoic, tragic anti-heroes we've come to expect, but common hoodlums -- a desperately vague and frightened breed of criminal. The plot is simple. The yakuza attempts to extort money from a local hotel by using it as their favorite hang-out, scaring customers away in the process. To combat the problem, the hotel manager tries to form a kind of anti-yakuza task force, but finds the other employees too frightened to fight back. When the only two people naïve enough to take the job -- the hotel accountant and an ex-wrestler-turned bellboy -- prove woefully ineffective, the manager decides to bring in a professional to help them along -- a spunky female lawyer specializing in minbo, or the means by which the gangsters manage to extort money without actually breaking any criminal laws. What follows is a complex series of mind games as our hapless heroes learn how to deal with the gangsters from the daring minbo expert and, in the process, learn how to stand up to their oppressors. Itami's regular leading lady and wife Nobuku Miyamoto is excellent as the lawyer whose courage inspires the meek employees to fight back, and while Yasuo Daichi overacts a little as the bellboy, and Akira Takarada makes a very appealing Everyman as the stressed-out accountant-turned yakuza fighter. Itami's assured direction lends a healthy dose of black satireto the proceedings, aided by a brilliant score from composer Toshiyuki Honda. But the most fascinating aspect of Minbo is in its revelation of the yakuza as a gang of loud street thugs playing word games and using innuendo as a way to take money from the easily intimidated. As if to prove him wrong, Itami was viciously knifed gangland-style just weeks after the film opened in Japan. But, just like the character in his film who survives a yakuza stabbing, Itami still publicly denounced their power, continuing to inspire the people of Japan to stand up for themselves. Minbo is a powerful, funny, and resonant picture. 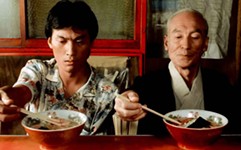