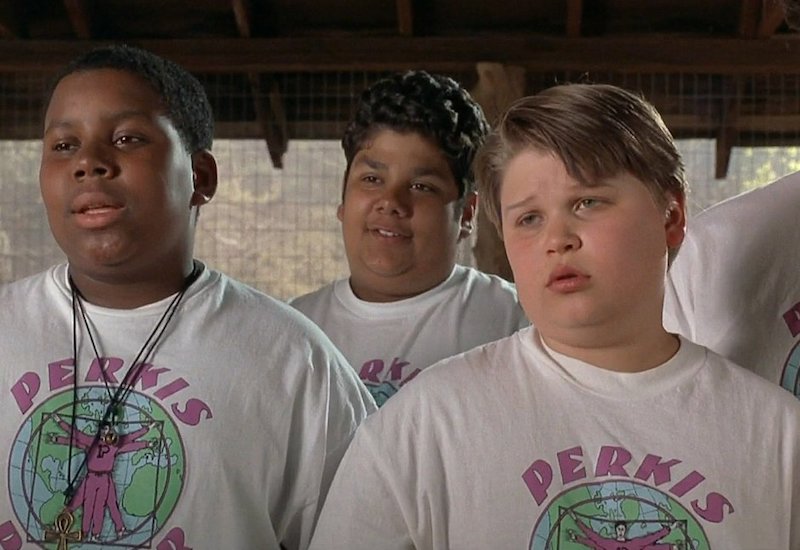 “He Ain't Heavy, He's My Bunkmate” could be the theme song for Steven Brill's directorial debut Heavyweights, a film about a camp for overweight (weight-challenged?) boys. Predictably upbeat as a Disney product, Heavyweights does offer some entertaining dialogue and a few fun performances, such as Ben Stiller's Tony Perkis, the fanatical dictator who takes control of Camp Hope after the former owners Harry and Alice Bushkin (portrayed in cameo roles by Anne Meara and Jerry Stiller, Ben's parents) file for bankruptcy. The story begins on the last day of the school year. Plump pre-teen Gerry (Schwartz) comes home looking forward to a summer of loafing, only to be informed by his well-meaning parents that he is being sent to Camp Hope for the summer. Meeting lots of fun (and similarly overweight) boys on the bus to the camp, Gerry begins to look forward to his summer. However, once the kids settle in, they are tearfully told of the camp's bankrupt status and change of ownership. With a bizarre light and laser show, the campers are introduced to their new host, Tony Perkis. Stiller is appropriately beefed up for the role of the exercise-conscious fanatic -- picture a mean-spirited Richard Simmons. Perkis is completely inappropriate for the job, having grown up with lots of money and little love: “I'm looking forward to interacting with children for the first time,” the thirtysomething tells the doubtful campers. Although Stiller's hair and voice are a bit overdone for the role, he is one of the more entertaining caricatures in the film. For the remainder of the movie Gerry and his bunkmates battle Tony and his plans to tape their weight-loss exploits for a money-generating late-night infomercial. It's a Disney picture, so it's got to have a message or Walt would be spinning in his iced grave. The movie stays neutral concerning the weight debate, conveniently sidestepping any condemnation of being overweight; instead, it focuses on healthful moderation. Heavyweights extols the virtues of a sound weight loss plan that includes nutritious foods, moderate exercise, and, above all, a healthy dose of confidence in one's own talents. Gerry develops these skills, although not without suffering. In one letter home he describes camp as intolerable: “Someone once said war is hell. They've never been to fat camp.” Watching Heavyweights isn't as bad as either war or fat camp, but its few bits of truly comic dialogue (courtesy of co-writers Brill and Judd Apatow) and inspired acting aren't enough to save the film from its syrupy and predictable theme.