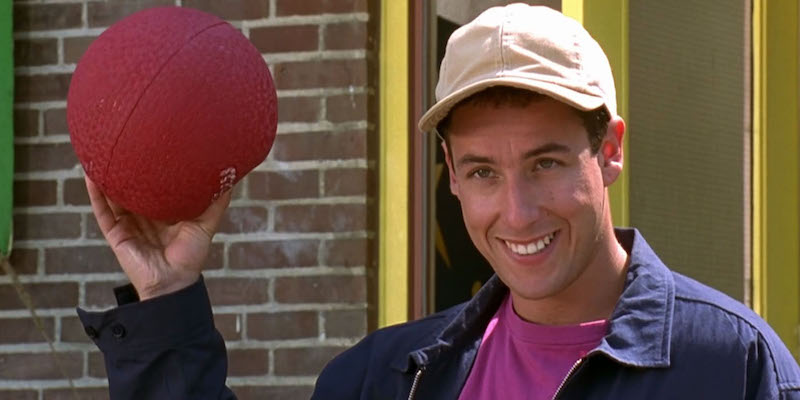 Behind the bland, seemingly innocent title of Billy Madison lurks one of the most outrageously bad movies in recent memory, a misfire so ridiculously and consistently off-target from anything remotely resembling a good film that it doesn't seem at all like a vehicle designed to transform its rising young star (Adam Sandler of SNL fame) into the next Jim Carrey – but, rather, a solid, concentrated effort to destroy his career in the movies. For the record, the plot follows Sandler as the titular Billy Madison, a character drifting somewhere in between Richie Rich, Bluto from Animal House, and Jim Carrey in Dumb and Dumber (just the kind of guy you want to spend 90 minutes with, huh?), as he goes back to school to repeat and pass all 12 grades in six months or lose his right to inherit his father's business. Yeah, right. If that's not enough to swallow, the film has Billy pass the second grade in one scene and just about go through all four years of high school in a two-minute music video montage (quite an accomplishment for a twentysomething who can't even spell the simplest, one-syllable words). Of course, there's also a totally gratuitous, not to mention totally illogical, romance with an elementary-school teacher (an insulting role, played with a "good sport" indifference by Wilson), along with the usual business rivalry with a scumbag opportunist, but does any of it really matter? Of course not, because Billy Madison even fails as a goofy, formulaic time-filler. With incredible dialogue gems like "If peeing in your pants made you cool, I'd be Miles Davis!" and supposedly hilarious set-pieces involving flaming bags of shit, homosexual teachers doubling as masked wrestlers, and giant rampaging penguins, it's not hard to imagine this film becoming a "so-bad-it's-good" favorite somewhere down the road. But now is not that time, what with The Jerky Boys and Highlander III still lingering at the local cinema. What else can I say – Billy Madison is a sorry excuse for a movie, and director Davis (CB4, Guncrazy) and star Sandler should be very embarrassed.