A Man of No Importance

“You're either on the bus or off the bus” became one of the guiding mantras in Tom Wolfe's novel The Electric Kool-Aid Acid Test. Taken both literally and metaphorically, this statement aptly describes the character of Alfie Byrne (Finney) in Suri Krishnamma's enchanting first theatrical release A Man of No Importance. Finney plays Byrne, a Dublin bus driver with a deep appreciation for Oscar Wilde. There are few gray areas for Alfie: You're either one of his passengers (and therefore a friend) or you use another form of transportation. Alfie keeps his riders enthralled by quoting Wilde to them as they make their daily treks to dreary jobs. These literary stand-up routines do more than entertain the passengers; they provide a reason for Alfie to get up each day, to cook breakfast for his irritable sister Lily (Fricker), and to deal with the trivialities of his job. But what he truly lives for is the annual presentation of a Wilde play performed under his direction by a ragtag community theatre group, comprised mostly of the passengers from Alfie's bus. His latest choice of Salome is a bit more risque than the community is used to, and the staging of this doomed production is one of the hilarious storylines in A Man of No Importance. The film is really about Alfie, though, and how his life and his environment have conspired to repress many of the ideas and desires that truly represent who he is. References to Oscar Wilde's work and his life permeate Krishnamma's film: The title itself is a twist on one of Wilde's plays, A Woman of No Importance. Someone with little knowledge of Wilde's work should not be dissuaded from seeing this film, however. The important elements explain themselves as the story unfolds. Additionally, Finney's portrayal of Alfie is heartbreaking in its naïveté about his own desires, yet he also brings to the character an unbridled joy in life's basic pleasures. The supporting performances are equally compelling. Fricker's (My Left Foot) depth as an actress reveals a soft core beneath Lily's eccentric and narrow-minded views. Rufus Sewell portrays Robbie Fay, Alfie's bus-driving partner, as appropriately young and macho although ultimately mature beyond his years. As the newest passenger on the bus and Alfie's choice to play Salome, Fitzgerald's Adele has the face of a weary angel and the sweet disposition of an uninitiated kindergarten teacher. A Man of No Importance not surprisingly is an ironic title; Alfie Byrne is of great importance to his passengers and his family. Screenwriter Barry Devlin's funny, dignified characters and Nic Raine's orchestration of classics such as Cole Porter's “Let's Do It (Let's Fall in Love)” work beautifully as a backdrop for the story of Alfie's awakening. This film just may inspire viewers to ditch their autos and take mass transportation. 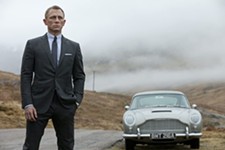 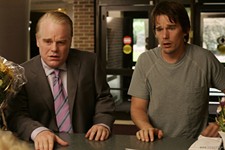