Yeesh! A Troma film made right here in Austin. Who would've thought that the company that brought us The Toxic Avenger, Sorority Babes in the SlimeBall Bowl-A-Rama, and Surf Nazis Must Die would pick up a local product like this? Just a hunch, but I'll wager it had something to do with the working title of the production being Teenage Catgirls in Heat and the oodles of topless Texans prancing across the screen and meowing like, well, teenage catgirls in heat. When a mysterious sphinx-like statue is unwittingly uncovered by a crazed Hill Country gramma one day, all the cats around town commit mass kitty suicide by leaping to their deaths from whatever high place they can scramble to (telephone poles, hilltops, roofs). Once dead, the felines metamorphose (off-screen, natch) into naked young women who like to sniff the air and rub up against things, purring and twitching all the while. These catgirls congregate at the house containing the ancient statue, which psychically advises them to go out and wreak havoc on the unsuspecting public (i.e., two clueless males who just happen to be in the wrong place at the wrong time). What happens from this point on is a mystery even Mr. Moto would have a hard time puzzling out -- something about a guy with a vacuum strapped to his back tracking the catgirls via their kitty brain waves. You got me. Silly in the worst sense of the word, Catgirls is a very, very low-brow affair, the kind of film that makes me wish to high heaven that we still had a working drive-in in this town. This much cheesy violence, laughably bad dialogue, and nekkid women that hiss at you can only, and I mean only, be fully appreciated when viewed through a steam-clogged windshield and a Lone Star (Bock) haze. 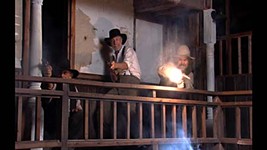