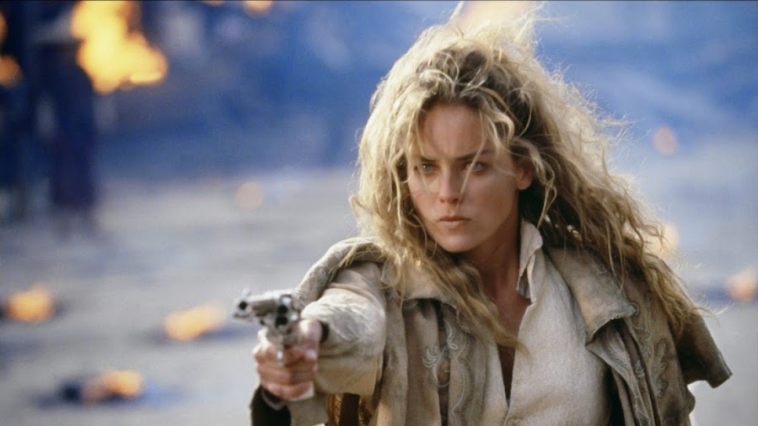 The Quick and the Dead

There is, regrettably, precious little that is quick about Sam Raimi's newest film. It drags on interminably, laying out ritualized gunfight after ritualized gunfight, while fragments of the wholly predictable backstory waft about like so much acrid gun smoke. Raimi, the rightfully celebrated director of the Evil Dead trilogy, has hit a snag here; he seems lost without former leading man Bruce Campbell to show him the way. Much of the blame with The Quick and the Dead (kudos to Raimi for slipping the word “dead” into yet another of his films, though) lies with Simon Moore's patchwork script, which manages to cobble together as many western clichés as possible, and then throws in a female protagonist to give the whole mess a Nineties spin. Stone is Ellen, a mysterious gunfighter who rides into the town of Redemption one day spoiling for a fight. The town is presided over by Hackman's Herod, an evil ex-outlaw who's built this less-than-shining pillar of community in the midst of the badlands. It's the eve of the Herod's annual free-for-all, round-robin gunfight in which anyone can challenge anyone to a fight to the death -- Herod's cunning way of weeding out his enemies. Here Ellen meets Cort (Crowe), a killer-turned-man-of-God who used to ride with Herod's gang and is being held captive in Redemption while awaiting his turn to die. Ellen, for her part, has a grudge against the irascible Herod but she seems to have trouble killing the guy; she gets her chance not once, not twice, but three separate times and fumbles them all. Of course, it's obvious to anyone who's ever enjoyed western films why she wants the man dead (the final flashback scene is stolen nearly in toto from Sergio Leone's Once Upon a Time in the West). Raimi does his best to rise above the conventions of the script, filling the gunfight scenes with gobs of style that may have worked just fine in his Dead films, but look simply ludicrous here: wild angles, rapid cutting, and skewed camerawork do not tension make. Toward the end of the film, Raimi tosses in a few effects cribbed from Robert Zemeckis' Death Becomes Her and one straight out of John Woo's Hard-Boiled, but even these gory crowd-pleasers seem more like acts of directorial desperation than anything else. Hackman is pleasantly unctuous, but the role is too much like his character in Unforgiven, while Stone alternately mumbles and caterwauls her way through the film. It's a mess, and one that even the pickled cowboys behind me found yawningly tedious, and that's not something I ever thought I'd be saying about a Sam Raimi movie with the word “dead” in the title.