I, the Worst of All

“Get thee to a nunnery.” Such might have been the thinking of some smart women of yore, women seeking a safe haven to pursue a life of the mind, a life unfettered from the imperatives of marriage and motherhood, a life devoted to study and artistic endeavors which could only be interrupted by vespers and the occasional self-flagellation. In Yentl, Barbra Streisand's young character donned male rabbinical drag in order to follow her educational goals. Here, in this historically set true story I, the Worst of All, Juana Ines de la Cruz (Serna) dons nun attire in order to pursue her intellectual aims after being denied entry into the “men only” domain of the university. Based on the book The Traps of Faith by Octavio Paz, this 1990 film by Argentinean director Maria Luisa Bemberg takes place in 17th-century “New Spain” (Mexico) as the progressivism of the European Renaissance is giving way to the horrendous repressions of the Spanish Inquisition. Juana is truly one of the intellectual lights of her time: She is an accomplished playwright and poet, the possessor of scientific tools and an extensive library maintained within the convent walls, the celebrated star of the convent and much-visited mentor to “outside” intellectuals. Beloved by the Spanish viceroy and vicereine (Sanda) who govern the area, Juana receives their protection and patronage. And between Juana and the vicereine runs an undercurrent of special admiration and physical desire that, though repressed by modern standards, certainly transgresses the proprieties of the time. Sanda, who has lent her bold yet understated sexual fire to many a film (The Conformist, 1900) is compellingly cast against the physical intensity of Serna's (Matador) piously robed form. When a new, woman-hating archbishop takes over the territory, Juana's royal protectors can no longer help her and the heavy hand of repression squelches her intellectual pursuits. Why, it's enough to cause a girl to question her faith. Though I, the Worst of All discloses a fascinating slice of feminist history, it too often proceeds with the same staid sobriety that commonly mars historical film dramas. Also, the points the film makes about the inherent misogyny of the religious/political system and the grievous injustices it causes are restated often and far too repetitively. Yet, stories about women who, no matter the century, buck the “system” are far too infrequent to be ignored. 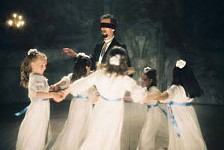 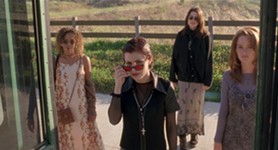 The Craft
Teen witches made high school a dark and brooding place long before vampires took over as the kings of teen cool.

I, the Worst of All, Maria Luisa Bemberg, Assumpta Serna, Dominique Sanda