Boys On the Side

To call Boys on the Side a “women's film” is a bit simplistic, but there's no doubt that it genuinely speaks to the powerful bond of sisterhood. At first, there's little promise of anything but an entertaining road movie in which three mismatched female characters -- a lesbian musician with a penchant for falling for straight women (Goldberg), an uptight real estate agent who's never had much luck with men (Parker), and a newly pregnant girl/woman who attracts men with little trouble (Barrymore) -- travel west across America, on the lam from the law and in search of a life different from the one they've known. The similarity to Thelma & Louise is superficial but inescapable; at one point, one of the characters quips that she's not going over any cliff for the other two. Soon, however, the screenplay shifts into a lower gear and the cute and the funny give way to something more serious as illness turns everything upside down. It's here that the bonds between the three women -- particularly between Goldberg and Parker -- really take root and transcend the sexual, the mundane, the clichéd. In this respect, Boys on the Side is surprisingly effective, although its narrative often advances awkwardly. (A subplot in which Barrymore's hunky cop fiancé -- played by McConaughey, perhaps best remembered for his role as the older kid in Dazed and Confused -- who loves his woman and the law in equal measures, turns her in for the accidental murder of her former, abusive boyfriend never really makes any sense.) Goldberg, who has seldom been better plays the role of a person who has learned over the years to camouflage her vulnerability. In the past, she has made many a mediocre movie bearable, but often at the expense of creating a three-dimensional character. Here, the smart-ass jokes and posturing suit the character she plays. Parker is wonderful -- as always -- in her compassionate performance of a person facing the inevitable with every dignity she can muster. It would have been easy to wring copious tears from the role, but Parker plays it with a proud stoicism that elicits admiration rather than pity. The film's emotional high point comes when Goldberg serenades Parker with Roy Orbison's “You Got It” -- the love that's expressed in the simple rendition of that song is simply overwhelming. (Other smartly handled music references in the film include the appearance of the Indigo Girls.) What's disturbing about the early trailers for the film and even its illogical title is how both deceptively imply something light-hearted and ultimately trivial, rather than something as moving and as meaningful as what's evinced in that scene. It's a bait-and-switch approach to marketing that assumes that the audience for this movie has to be lured into theatres under false pretenses. Whatever its flaws, Boys on the Side deserves better than that. 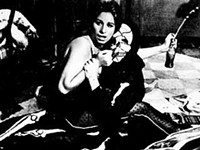 The Owl and the Pussycat
A sensible double bill with Born Yesterday, the story is about a streetwise prostitute and a sheltered intellectual. Streisand is very funny in this reworking ...