Sumptuously rich visuals and a story of doomed love characterize the intriguing French epic Queen Margot. While the film has opened only recently here in Austin, Queen Margot has already won recognition and various awards, including the Jury Prize at last year's Cannes Film Festival. Director Chereau (L'Homme Blesse, L'Intervention) collaborated with Daniele Thompson to adapt Alexandre Dumas' novel of the same name for the screen. The film recreates two key events that occurred in France during the late 16th century: the arranged marriage between the Catholic Marguerite of Valois (Adjani) and the Protestant Henri of Navarre (Auteuil), and the St. Bartholomew's Day Massacre. Marguerite, known as Margot, is the daughter of Catherine de Medici (Lisi) and sister of King Charles IX (Anglade). The marriage is a political arrangement designed to appease the warring religious factions in France and ensure continued ruling power for Catherine's son, the ineffectual king. When Catherine's plan for the assassination of Charles' Protestant confidante Coligny (Brialy) goes horribly awry, she orchestrates the deaths of over 20,000 Huguenots (French Protestants) on St. Bartholomew's Day. The subject matter of this film is truly epic, but Chereau presents the story as a character-driven narrative, which helps somewhat in clarifying the various acts and retaliations that occur between the Catholic ruling family and the Huguenot factions in Paris in the late 1500s. The title is misleading because the film tells the story of many characters, not simply of Queen Margot. Her relationship with the Huguenot soldier La Mole (Perez) is the true love story, but aside from the tremendous sexual energy of both characters, it is difficult to understand when and how the connection between them blossomed into the consuming passion that redirects their lives. Adjani is known for portraying independent if not ill-fated historical figures, and Queen Margot is no exception. When the camera comes to rest on her face at the end of Queen Margot, we are reminded why the film is named for her. The change in her character is at the core of the film as a metaphor for the turmoil that her country endures during its religious controversy. Fans of Adjani and Auteuil will not be disappointed, and Virna Lisi's portrayal of Catherine is monstrous enough to have won her the Best Actress award at Cannes. A stellar cast and stunningly beautiful photography by Philippe Rousselot work in the film's favor although its two-hour plus running time becomes apparent at various intervals. The film is an epic, however, and as such it must convey all of the human drama necessary to flesh out this story of intrigue and passion during the religious wars of the 16th century. 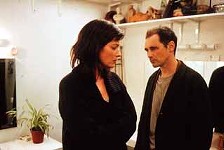 Intimacy
Don't let the title fool you: This is one of the most desperately bleak love stories to come down the pike in some time; it's ...