Never have I heard the word “fuck” used so frequently and with so little panache as in Jefery Levy's (Inside Monkey Zetterland, Drive) angst-filled social commentary S.F.W. (hip shorthand for the generational battle cry “So fucking what”). Based on novelist Andrew Wellman's book by the same name, S.F.W. is the story of Cliff Spab (Dorff) and his blast into famedom after rescuing himself and fellow hostage Wendy Pfister (Witherspoon) from a 36-day siege in a convenience store at the hands of terrorist group Split Image. Levy's film attempts to take a hard look at the media and how its news-collecting practices have reached ethical lows. S.F.W. contains some interesting touches, such as using the same actor (Roarke) to portray the interchangeability of talk/news show hosts Larry King, Phil Donahue, and Sam Donaldson. The soundtrack makes good use of bands like Soundgarden and Babes in Toyland to add angst-ambience and underscore the message that media products such as MTV are (for better or for worse) shaping our culture. Dorff turns in an appropriately dazed performance as Spab, the hero first puzzled and then cynical about his own catapult into celebrity. Witherspoon is fine as Spab's love interest and fellow hostage Wendy, but the film definitely privileges Spab's experience with the media machine. Perhaps S.F.W. comes at the wrong time, though -- too close on the heels of movies such as Natural Born Killers and Pulp Fiction which explore the media and/or over-the-top violence in a manner that makes greater use of smart dialogue and stylistic flourishes to add a more effective note of irony and sly humor. There's something about the media frenzy and the lead characters' reaction to it in S.F.W. that is a bit too noncommittal; when we leave Spab and Wendy at the end of the film, our investment in their lives really hasn't grown since we first met them. Somehow, I think Levy does want the audience on the side of his characters. Additionally, any pretense at intelligence is shot because of the characters' overindulgence in expletives. At times, it's like watching a live-action episode of Beavis and Butt-head. The last 15 minutes of S.F.W. do offer a surprising twist, but I still say S.T.M. -- see the matinee. 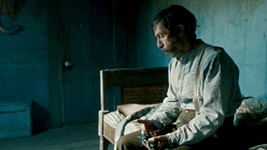 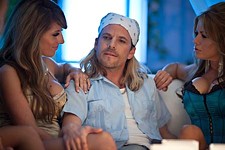