It Happened One Night

This classic romantic comedy is the first movie ever to sweep the five major Oscar categories. 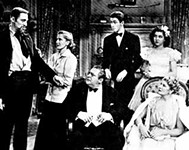 You Can't Take It With You
Based on the antic stage play by George S. Kaufmann and Moss Hart, this Capra film earned Oscars for the film and the director. With her impeccable timing and idiosyncratic delivery, Jean Arthur plays a girl who must introduce her fiancé and his parents to her decidedly eccentric family.