While the title of this film may sound like the newest program from Microsoft Word, The Pagemaster is actually about a more traditional form of communication: the written word. Richard Tyler (Culkin) is a 10-year-old boy with the worries of an 80-year-old. While running an errand for his father (Begley), Richard takes refuge from a sudden rainstorm in the local library. Here he meets Mr. Dewey (Lloyd), head librarian, who is anxious to introduce Richard to the adventures of reading. Richard, however, just wants to get home. As he heads for the lit “Exit” sign at the rear of the building, he is knocked unconscious by a sudden fall in the lavishly painted rotunda of the library. Richard wakes up to find himself a cartoon in the animated world of the library. Director Hunt supervises the animated portions of the film, and his previous success with The Fox and the Hound and The Rescuers Down Under is continued in the lively, vivid animated sequences. The transition from live-action to animation is cleverly shown as the ceiling's painted scenes from various adventure books melt and drip down onto Richard and the library floor. Richard's quest to escape the library is assisted by three animated genres of literature “personified” by Adventure (Stewart), Fantasy (Goldberg), and Horror (Welker). These three “voice talents” provide the best moments in the film. Together they tug and coax Richard through various escapades and toward the distant “Exit” sign of the library. In the process, Richard learns the value of imagination and self-esteem. At times, the film dips heavily into melodrama (perhaps for the benefit of younger viewers). However, The Pagemaster's liberal use of brilliant color and special effects animation does allow kids to enjoy the situations Richard and his “books” get into. In addition, the screenplay by David Casci, David Kirschner, and Ernie Contreras incorporates dialogue appealing to all age groups. Children will enjoy the fast-paced and fanciful animation, and older viewers will smirk at the smart and feisty repartee between Adventure and Fantasy. Perhaps the best reason to see this film is that it promotes reading and self-discovery. In this age of technology, a not-so-subtle plug for a classic method of mental stimulation comes as a pleasant surprise. After all, books are free through the library. Take the kids to see The Pagemaster and stop at your local branch on the way home to get them their library cards. 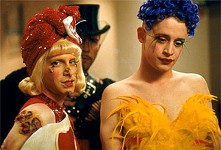