Director Paul Bartel has a talent for identifying great premises. As evidence, I offer examples like the “pound-of-flesh” financing scheme of Eating Raoul, the Machiavellian auto race of Death Race 2000, and the paranoid self-reflexivity of Secret Cinema. In Shelf Life, Bartel has adapted a three-person, one-set stage play for the screen. Originated for the stage by the same three performers who here bring these characters to the screen, the story is an extended meditation on the effects of lengthy isolation and physical containment on the growth of the individual. On November 22, 1963, a typical nuclear family is watching TV and, upon seeing JFK's assassination, become convinced that the commies have taken over and head immediately for their basement fallout shelter. End of preamble… now cut to 30 years later. Three mightily overgrown children are still living in the shelter. It seems that Mom and Dad must have died of botulism early on after eating some bad canned good. They're nothing but a “bag of bones” in the back room. Not knowing any better, the young kids -- two girls, one boy -- never left the shelter and now, 30 years later, they are physically adults with the mentality of children whose only new cultural stimuli have come from flickering TV signals and old 45s whose grooves have worn thin from too many spins on the record player. Each day is occupied by game-playing and established rituals, the structures deriving both from their own free-ranging psyches and the sporadically intercepted, black-and-white TV images of soap operas, commercials, movie fragments, and Ed Sullivan-ish variety acts. These middle-aged bodies are tormented by all the usual childhood fears that have somehow warped to accommodate their unusual situation, their libidos continue to develop amidst this incestuous Barbie and Ken-like atmosphere, and the social dynamics are a constant whirl of power shifts, bonding moments, and individuation gambits. Shelf Life is a great concept carried out to the nth degree. Much of the time, the viewer responds with the same fascination that would be evinced when watching a train wreck -- the satisfaction of participating in an epic collision with none of the social consequences involved in picking up the pieces. The performances are rich and full of details that vastly open up this inherently claustrophobic story. At times, the project retains too much stage flavor in its blocking and vocal delivery to sustain an uninterrupted cinematic illusion. And that allows us too much time to wonder about practical questions, like how no one has noticed this family missing in 30 years and just how many cases of canned goods are needed to keep a group alive that long. Yet, the movie's greatest problem (which is one that plagues many great concept projects) is that it has nowhere to go. Once you follow the premise to its logical extensions, events can only be wrapped up by sputtering to a close. And Shelf Life does sputter, although it's mighty tasty before reaching its expiration date. 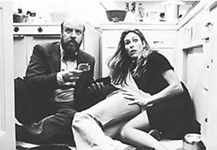 Eating Raoul
Paul Bartel is a gentleman of the perverse. This hilarious comedy is a demented take on how the modern Blandings build their dream house: by ...