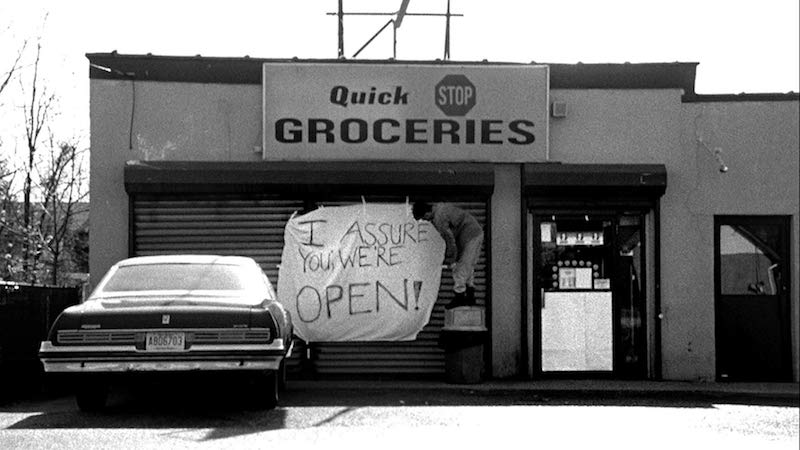 A person could do a lot of things with $27,575, but Kevin Smith made the right decision when he blew the bankroll (and his comics collection) on this, his feature debut, an outrageous, profane, and deliriously dead-on comedy that follows a day in the life of two young convenience/video store clerks. O'Halloran is Dante Hicks, a 22-year-old slacker extraordinaire who receives a call from his boss one Saturday morning informing him that he'll have to come in to cover a sick co-worker's shift. Hesitatingly, he agrees, and unwittingly sets himself up for a day of consumer abuse and convenience store chaos unrivaled even at the Stop 'N Go on the corner of 45th and Duval (if you've been in there after midnight on a weekend, you know what I mean). Next door to Dante's unbeloved Quick Stop is the smallish, grungy video shop where his best friend Randal (Anderson) works. Together, they spend the day alternately kvetching, hurling abuse at the customers, and keeping an eye on the genuinely odd assortment of characters that comes through the door (all this sandwiched between a rooftop hockey game and an ex-girlfriend's wake, in which Randal accidentally assaults the corpse). Shot in 16mm when director Smith (who actually worked at the Quick Stop/video store during the making of Clerks) had some off hours, the film is resolutely low-budget, full of shaky camera work, the occasional less-than-perfect edit, and a few sound glitches. Conveniently, though, all this shoestring filmmaking technique only adds to the film's desperate charm, as it spins its tale of suburban New Jersey ennui and twentysomething stagnation. Depending on how old you are, you may find yourself recognizing some of these characters and their situations. Old girlfriends who pop up suddenly engaged, best friends you just want to smack, and bosses from hell, Clerks is a reality overdose with a sardonic sense of humor. Although a few bits (the film is done in blackout sketch style) fall flat and a good ten minutes could be shaved off the running time with no visible damage, it's an impressive and irascible debut that rings true even when you're laughing too hard to hear it.