Caro Diario (Dear Diary) makes it clear why philosopher-filmmaker Nanni Moretti is often called the Woody Allen of Italy. Though Caro Diario is Moretti's eighth completed film, it is the first to receive distribution outside Italy. If his receipt of the best director prize at this year's Cannes Film Festival is any indication, Moretti is well on his way to international success. The Woody Allen comparison is apt in the sense that Moretti writes, directs, and stars in his own movies that come across as shrewd yet funny essays. Caro Diario is divided into three sections, each a separate essay unto itself, and Moretti serves as host. In the first segment (which, I have to admit, is my favorite), Moretti scoots around on his Vespa as he leads us on a personal tour of Rome. Bit by bit, we become privy to his world view. He goes to a movie where dissatisfied Italian yuppies complain of their lives. He leaves the theatre and spews to himself in the street “You've gotten ugly. I shouted the right slogans and I'm a splendid 40-year-old.” He goes to another cinema to watch Henry: Portrait of a Serial Killer and fumes as tries to remember who had recommended the movie. Once he does, Moretti goes to that critic's home and tortures him. He uses the occasion of running into Jennifer Beals to babble on about why he's so crazy about Flashdance. The section ends with an elegiac ride out to the spot where Pier Paolo Pasolini was murdered. The second section is somewhat of a travelogue in which Moretti and his friend Gerardo (Carpentieri), an avowed recluse from popular culture, look for a sedate locale in which to work. First, they visit an island that is totally dominated by its tyrannical children. Gerard gets sucked in by TV soap operas to the extent that he begs information about The Bold and the Beautiful from American tourists spotted during a climb across the volcanic mountains of Stromboli. The final segment involves Moretti's almost fatally absurd experience with doctors and cancer. It begins with images of him undergoing chemotherapy and then backtracks to follow him as he scurries from one doctor to the next, trying to sort out the causes of his odd symptoms. One says it's inoperable cancer, another says “red foods,” one suggests wearing cotton socks, and the “Prince of Dermatologists” tells Moretti what a big fan of his work he is. On and on, Moretti recounts the abundant yet consistently inaccurate diagnoses and stacks up the boxes of prescribed medicine. It turns out to be something very obvious and treatable. After spending time with Moretti during the course of this movie, one discovers that he makes an interesting and entertaining companion. His good company will be increasingly sought by new friends beyond Italy's borders. 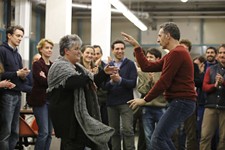 Mia Madre
A filmmaker says goodbye to a mother 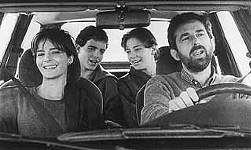 The Son's Room
A teenage boy's sudden, accidental death leaves his family members struggling to find the means of coping with their grief in The Son's Room, a ...