I suppose it was inevitable that video games would become the next medium to be recycled by Hollywood. Lately, most fighting video games have as much plot as an average Jean-Claude Van Damme or Dolph Lundgren film. Double Dragon is the first of the three video games-turned-films that will be hitting the big screen soon. Billy (Wolf) and Scott (Dacascos) Lee are brothers trying to survive in New Angeles, the post-quake remains of Los Angeles in the year 2007. The days are peaceful and ruled by the cops. At night, however, all decent people leave the streets to the gangs. To be out after dark means certain death. When our heroes find themselves out after curfew, they encounter the leader of the underworld, Koga Shuko (Patrick). Shuko wears half of a medallion that allows him to turn himself into a shadow and enter other peoples' bodies. There is a second half which would allow him to rule the world and Billy unwittingly finds himself in possession of it, making the brothers targets for Shuko's wrath. On screen, Wolf and Dacascos have a remarkable chemistry. They bounce cheesy lines off of one another like they were reciting Shakespeare or Tarantino or whatever passes for great writing these days. Both are surprisingly good actors. Unfortunately, there are no further surprises. Patrick, who played the bad terminator in Terminator 2, is slowly becoming stereotyped by morphing bad guy roles. Milano, in her skin-tight t-shirt and shorts, is sufficiently set up to be objectified by every hormonal young boy who enters the theatre. The point is, mom and dad will find nothing special in Double Dragon. The grim view of the future is nothing new, the special effects involve poorly used matte paintings and pyrotechnics, and the actors do far too many double-takes. Mom and dad's 13-year-old son, however, may love it because it has action, “funny” dialogue, and women in tight clothing. 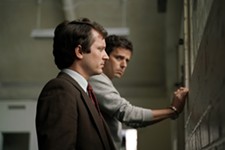