In the Land of the Deaf

Movies. Talking pictures. Sight and sound. In this day and age, we accept the pairing of moving images and synchronous sound as a given. They're the movies. So how does a more-or-less silent documentary fit into the scheme of things? Quite interestingly, it turns out. This French film, which was shot over the course of several months, puts itself in the middle of deaf culture and opens that society uup to the world of the hearing. This unusual documentary reveals to us this separate culture -- so often excluded and isolated from the hearing world -- and the animation, articulation, customs, and pride that distinguish its members. By the movie's end, the hearing audience will, most likely, feel like the excluded ones. Strategically, a film about deaf culture presents many organizational obstacles. This is no ordinary documentary fueled by numbers, facts, and statistics. This is a project that records the experiences, opinions, and attitudes of deaf people. To call this film “silent” is incorrect. Many of the subjects and interviewees vocalize aloud and the movie contains all the ambient noise any hearing person would ordinarily hear. Most of the speakers communicate through sign language and their comments are translated for the audience via onscreen subtitles. The hearing viewer gains a sense of the richness of life in the absence of sound. One speaker tells of the variations in sign language gestures across different languages. Another tells of his disappointment when his child was born with intact hearing and his diminished expectations for intimate communications. Additional factors in organizing this movie are the choices made when framing the signing speakers: conventional head shots are scuttled in favor of full body shots. Communication becomes much more than talking heads. In the Land of the Deaf challenges our traditional expectations of documentaries and filmmaking while showing us our limited range of communication. It is a movie that is like nothing you've ever seen -- or heard -- before. 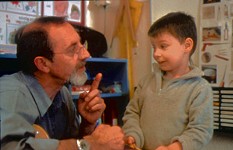 To Be and to Have
In this documentary, a one-room schoolhouse in France is a microcosm of the teaching universe.

In the Land of the Deaf, Nicolas Philibert