Both Stallone and Stone have been aching for a hit of late; suffice to say, this quickly cobbled together ghost of a film isn't it. Liberally adapted from John Shirley's Specialist series of action-adventure novels, Llosa's film posits Sly as a mysterious ex-armed forces "specialist," trained in covert assassination technique via controlled explosions. In the film's prologue, we see Stallone and buddy Woods in a South American jungle, preparing to blow up a bridge and take out a drug dealer as his Land Rover passes by. Stallone goes into a fit when he notices that the bad guy has a little girl in the car with him. Woods, ever the icy professional, blows the bridge anyway, setting up a permanent conflict between the two former partners. Cut to the present day. Stallone is a freelance assassin in Miami, working for whomever he feels needs his services most. Into the picture comes Stone as May Munro, a leggy blonde hell-bent on avenging the murder of her parents ten years previously by a group of shady drug-runners headed by Steiger and his misogynistic son Roberts. When Sly refuses her case, she goes it alone, thus necessitating his entry into the proceedings. What follows are 90-plus minutes of poorly shot explosions and mindless narrative so riddled with comic-book clichés that it makes the Rambo series look like historical melodrama. Little if any background is given for the characters' actions, and Sly, for his part, has taken the art of mumbling into heretofore unknown regions. Steiger is amusing as the aged cartel boss and Woods is his usual over-the-top self, but The Specialist is a slip of an action film, going nowhere and doing nothing. Llosa relies on stock action shots and tedious exposition to get from scene to scene. You keep waiting for something -- anything -- neat to happen, but nothing does. Like a bad dream, the film fades from memory as soon as you leave the theatre. 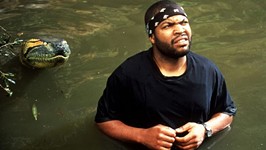