A female vagrant (Cates) appears suddenly in the British town of Bristol in 1817. She speaks some unrecognizable language and not a word of English, yet somehow her sounds and gestures convince her discoverers that she is a Javanese princess whose father will not be happy were she to be tossed into prison. She is taken in by the Worralls (Broadbent and Hughes), social-climbing members of the local gentry, who dress her in a turban, call her Princess Caraboo, and treat her like royalty. But there lies the mystery: royalty or fraud? A muckraking journalist named Gutch (Rea) sets out to discover the truth. He feels certain that she's an impostor but has mixed feelings about uncovering her true background since he derives such enjoyment from watching her put one over on the aristocracy who are making such fools of themselves as they transparently curry Caraboo's favor. Mrs. Worrall regards the Princess as a social asset and Mr. Worrall assumes her Far Eastern links will be profitable for his business affairs. Caraboo becomes the darling of the demimonde and dances with princes and turns most mortal men to mush. Apart from Gutch, the only other man to doubt Caraboo's royal origins is the Worralls' house butler Frixos (Kline), a pompous Greek servant with a funny accent. Princess Caraboo is generally charming and sunny, a family-oriented period comedy. However, its happy, romantic ending has a very fabricated feel, as if this tale based on a true historic incident needed a “happily ever after” finish to justify its conversion into a movie. The movie is generally successful as a light comedy, with its most appealing moments stemming from its mockery of the upper classes. Yet, its tone is unevenly split between utter farce and drawing room comedy, with Kline and Lithgow broadly clowning their way through their roles while the other players aim more for amusing satire. When combined with the inappropriately happy ending, the overall tonal imbalance indicates the movie's lack of a strong, guiding influence and stylistic marshal. Though these are impediments to ultimate narrative satisfaction, they are not so distracting that they disrupt immediate gratification during viewing. 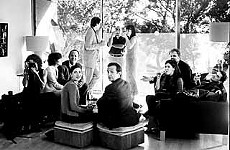 The Anniversary Party
Critics tend to get a little suspicious whenever entertainers try to break out of their niche to try something new. “But what I really want ... 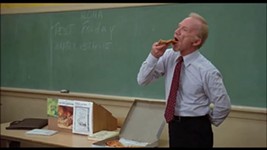