A scene occurs three-quarters of the way through Blue Sky in which Carly Marshall (Lange) is driving with her two daughters to Nevada. Their blue and white Chevy dips and rises over a series of hills. This stretch of rippling road becomes a metaphor for the family's turbulent life. Married to a major in the United States Army, Carly is an army wife not quite cut out for the grueling business of conforming to military mores. As Major Hank Marshall, Tommy Lee Jones is one of a select group of Army men privy to experiments using underground detonation, nicknamed Project Blue Sky because the radioactivity is so well concealed that even the clear blue sky doesn't change color after a test blowup. After a group of roles in which he plays men with either attitudes or chips on their shoulders, it is refreshing to see Jones portray a character who is comprised both of strength and vulnerability. Director Richardson's final film before his death, Blue Sky skillfully depicts a family living in serious meltdown mode during the atomic 1950s. The film actually tells two stories. The first concerns the contradiction between Marshall's principles and his career. The second story involves the Marhsall family and the complex unit they represent. The couple's two daughters, Alex (Locane) and Becky (Klemp), each act as both mother and daughter to Carly as they battle Carly's demons which threaten to destroy the marriage and their family. While the role of Carly has some annoying similarities to Lange's earlier role as Frances Farmer, Lange carries off the excess of her character by imbuing Carly with a core of hidden strength. In addition, Carly exudes both sexuality and a quiet vulnerability. Perhaps the most compelling aspect of this film is the couple's relationship. Searching for words to justify to his two daughters his acceptance of their mother's eccentric and often destructive behavior, Major Marshall explains, “What we call love... is actually an exchange of energy over time. It's simple quantum mechanics.” Hank and Carly's symbiotic relationship seems believable because of its flaws. With Blue Sky, Richardson has created a strong family with a tangled shared history. Each of these characters comes to life on the screen under Richardson's meticulous direction and through the accomplished performances of Lange, Jones, and the supporting cast. 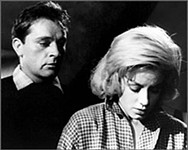 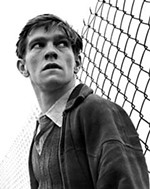 The Loneliness of the Long Distance Runner
...