I should say that I'm a huge Albert Brooks fan. He is always hilarious no matter what film he's in. So, when The Scout began with baseball scout Al Percolo (Brooks) cleverly bitching and moaning in classic form, I was relieved. This beginning, however, set me up for a quick and brutal fall when Fraser enters the picture as baseball phonem Steve Nebraska. Having sat through many a Fraser film, I am constantly amazed that there is nothing this boy can't do. Well, except act his way out of a paper bag. He doesn't quite have that down yet. Nebraska, supposedly a cute eccentric, is really just annoying and loud. Fraser's idea of a neurotic attack is to walk around like a whiny kid who needs to pee. The casting directors obviously needed a large, strong King Kong type. It would be interesting to see what The Scout could have been with an actor in the Nebraska role instead of a “look.” Brooks isn't completely blameless for the disaster that is The Scout. He co-wrote the stilted and often stereotypical script with Andrew Bergman (Fletch, Honeymoon in Vegas). Wiest makes a brief appearance as a psychiatrist whose extraneous plotline is left completely dangling. However, she gets more screen time than the sport this movie revolves around. There is something simply disgusting about a baseball movie that features less than 15 minutes of the game. The Scout does benefit from an interesting bit of self-reflexivity by having George Steinbrenner appear as the owner of the Yankees and Bob Costas commentate the World Series. Other than this, the only hope The Scout has is that maybe this nation is so baseball-deprived due to this season's cancellation that fans will watch anything. Don't fall for it. Rent The Natural or Field of Dreams. Hell, even Major League offers a much better homage to our nation's pastime than this dreck. 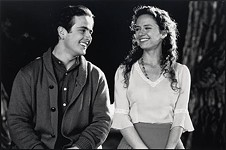 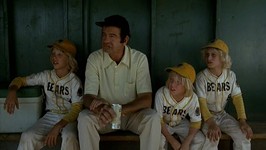