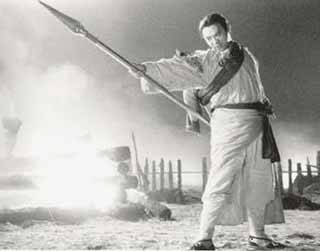 If you were one of the 100 or so audience members turned away during the Riverside's initial run of this movie, the latest action film from fight film superstar Jet Li, then here's you second chance to see it in all its glory on the big screen. Taking a page from Japan's Lone Wolf and Cub ultra-violent swordplay melodrama, as well as the old-style kung fu epics of Chang Cheh (The Five Deadly Venoms) and Yuen Woo Ping (Drunken Master), this typical chopsocky effort is an awkward combination of blood-soaked adventure and goofy comedy that never quite comes together but should prove to be a guilty pleasure for fans enamored of the period kung fu genre. Li stars as Jung Sei Kwan, a legendary Shaolin student turned patriotic revolutionary, who travels across China, fighting injustice with his equally skilled seven-year-old son. In between nifty fight sequences, Li finds time to become romantically entangled with a young thief, and serve as a bodyguard to a local bigwig. New Legend of Shaolin offers nothing new and generally suffers from poor plot construction, but it's hard to deny the appeal of a film this loony: Kung fu zombies, deadly needlepoint skills, and a spear with more gadgets than the last two James Bond movies put together are sure to keep audiences entertained and bewildered. This is the kind of movie where there just happens to be a pit of burning wax in the bottom of a clock tower, or where it's perfectly normal for a spear to become a spinning power drill; so potential viewers are warned to leave their cynicism at home. There's also the novelty of seeing a complicated fight sequence performed entirely by a bunch of young toddlers, all of whom still manage to put a lot of American martial arts brawls to shame! Figures. 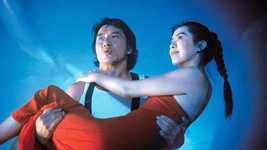