A Simple Twist of Fate

Taking its inspiration more from George Eliot's Silas Marner than tabloid television's coverage of the Baby Jessica and Kimberly Mays custody battles, A Simple Twist of Fate pits adoptive parent against natural parent in a genteel, almost somber fashion. Unquestionably, there's something to be said for treating the subject matter with some degree of restraint -- no doubt a Hard Copy version of this movie would play like the apocalyptic end of the nuclear family as we know it -- but in eschewing any hint of hard-nosed dramatics, A Simple Twist of Fate fails to make much of an impression. Its story of a lonely, miserly recluse, who becomes reborn when a toddler literally walks into his life, speaks to the healing redemption of parent/child love in a way that is less inspirational than say Kramer vs. Kramer, or others of its ilk. Moreover, it seems that age has softened executive producer, screenwriter, and lead actor Martin, a nonsensical comic who first made his mark as a “wild and crazy guy” with a fake arrow through his head and a case of “happy feet.” It was surrealistic comedy that rejected all notions of traditional humor: the punchline was that there was no punchline. In A Simple Twist of Fate, however, Dada is just something uttered by a baby girl. In fact, there's very little to laugh at here, and what is meant to be funny borders on the precious. (A scene in which Martin and his daughter break an afternoon's monotony by acting out the country-western song, “Running Bear,” comes close to being embarrassingly precious.) In the past, Martin has demonstrated an ability to integrate his sense of humor into a film script that tells a traditional story. The 1987 film Roxanne, an adaptation of Rostand's Cyrano de Bergerac, is a beautiful, endearing romance framed by some of Martin's funniest onscreen work. Perhaps Martin crafted his latest film as he did in an effort to become acknowledged more as a “serious” artist. Whatever the reason, there's no need to speculate about one thing: A Simple Twist of Fate sure could use a case of the “happy feet.” 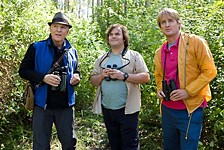