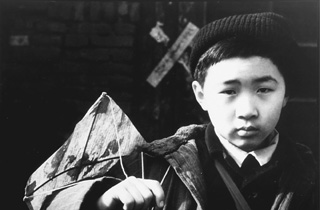 Chinese director Tian Zhuangzhuang's early films (On the Hunting Ground, Horse Thief) have been compared to the films of pioneer documentarian Robert Flaherty (Nanook of the North). The Blue Kite follows this aesthetic in its use of muted colors, sparse settings, and its story about people coping within their environment. Divided into three parts, this film is narrated by Tietou (played as an adolescent by Chen Xiaoman), the son of Shaolong (Quanxin) and his wife Shujuan (Liping). Infrequent radio broadcasts mark the film's different time periods, beginning with Stalin's death in early 1953. The story is told in flashback and begins with the marriage of Tietou's parents. This early scene establishes the impact of China's political changes upon the characters' lives. In voiceover, Tietou remarks that Stalin's death pre-empted his parents' marriage, and therefore his birth. This slightly ironic statement sets the tone for the film's personal drama played out against China's political upheaval beginning with collectivization in the Forties and Fifties and moving through the “Hundred Flowers” movement, the Great Leap Forward, and “re-education.” Although the focus of the film is Tietou's family, which includes various relatives and a small collection of neighbors, the political events of China shape the family's destiny. The interaction between Shujuan and her son Tietou is touching in its simple combination of motherly love and frustration, but the use of motifs such as the title's blue kite is somewhat heavy-handed. By the film's end, we are well aware of the symbolic meaning of the kite, and its impact loses much of its power because of overexposure. However, metaphoric use of other props, such as the breaking of a wedding gift during Shaolong and Shujuan's wedding ceremony, is effective. Without overemphasis, the meaning is poignant and clear. Subtly addressed throughout is the political and social climate. Tietou and his mother suffer greatly as they witness the loss of three significant male figures in their lives (thus, the three-part structure of the narrative). Each of these losses is tied, directly or indirectly, to the whims of a Communist regime. We also see the other family members suffer for their beliefs and their naïveté, but most of the confusion is played out through Tietou's character. He asks pointed questions from a child's perspective. “Why do you have to assist in production?” he questions Shujuan as she prepares for a three-month stay in the fields to assist in agricultural production. The Blue Kite offers a tantalizing combination of personal drama amid political upheaval, but investment in these characters is kept to a minimum in part because of cinematographer Hou Yong's careful crafting of a documentary feel. Long takes, natural lighting, and minimalist settings allow a sense of naturalism to characterize the film's narrative. The look of The Blue Kite is relentlessly bleak, and for good reason: this bleakness parallels the film's subject matter. The aesthetics of Zhuangzhuang's film are an acquired taste. Understated acting and a two-hour-plus running time are two factors to consider, but The Blue Kite provides an intense exploration of one family's struggle to survive in a politically oppressive climate.