The story of a woman who takes a chimpanzee as her lover -- and her husband who struggles to accept their union -- would seem inherently rich in provocative possibilities, a mother lode of philosophical ideas about the relationships of humans and their animal kin, of satiric commentary on the social customs of our race, of graphic visions of bestiality. But Max, Mon Amour, this 1986 film from Japanese New Wave director Oshima (In the Realm of the Senses, Merry Christmas, Mr. Lawrence), is the work that appears to disprove that thought. Its exploration of the bond between a Parisian wife and mother (Rampling) and a chimp named Max (Berk, compellingly disguised) is shallow, its portrayal of the conflict between the cuckolded husband, an English diplomat (Higgins), and the lovers mild, its sexual sensibility discreet, modest. It's difficult to figure out what Oshima and co-scriptwriter Jean-Claude Carrière (The Tin Drum, Valmont, The Unbearable Lightness of Being) were shooting for. A perverse comedy of manners so droll that it isn't intended to spark laughter? A taboo coupling of human and ape bled of its highly-charged issues until it resembles a mainstream domestic drama? A fable about tolerance? I can't say. I like to think I can spot intentional satire, but I was at a loss to identify any here. Some scenes appear to parody traditional dramas of adultery (Higgins catches his wife and Max in bed together in a rented flat), but they're presented in an almost painfully restrained manner, without apparent humor. And there is no fire in the film's few confrontations. It's as if the story were being filmed from a distance, perhaps through the bars of a cage at the zoo. With a thorough detachment that provides us with no passion or life, the film leaves us with nothing much but a vague sensation of surrealism that comes from seeing an affair between a woman and a chimp being treated in a matter-of-fact way.

Taboo
With 1976's outré love story In the Realm of the Senses, mercurial Japanese writer-director Nagisa Oshima cemented his international reputation as a provocateur and arthouse ... 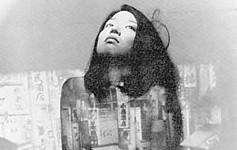