The initial idea of a bunch of kids escaping from their parents for an entire summer and just going crazy would have greatly appealed to me as a child. The entire camp excursion is led by Morris “Mud” Himmel (Jackson) who has grown tired of being shipped off to Camp Microchippewa every summer. So he cons an ex-drama teacher and local cheese salesman, Dennis Van Welker (Lloyd), into helping him fool his parents. The deal is that Van Welker will get the money that would normally go to the camp while Mud and his friends get to enjoy their summer without any real adult supervision. However, from this point on, any 10-year-old born and bred on television will find that Camp Nowhere offers nothing that they haven't already seen a million times in reruns of Meatballs or bad teen movies like Poison Ivy. Camp Nowhere tries really hard to be funny and rarely succeeds. It depends mostly on Lloyd's crazy characters to hold the narrative together and that works for a brief moment early in the film. Soon, however, other problems with the plot become all too apparent. Mud, the main character, is constantly referred to as a geek, but he hangs out with two of the “coolest” kids in his school. Since he doesn't act like a geek, the only reason Mud is called that is because the script occasionally says he needs to be. His other friend Gaby (Kay) is sent to fat camp every other summer and is often called chubby, yet she hasn't a visible ounce of fat on her. No kid is going to buy into a movie that revolves around a geek who isn't a geek and a fat girl who isn't fat. Camp Nowhere proceeds rather predictably as all the kids first get bored with being able to do everything they want and then suddenly have to band together in order to fool their parents who have demanded a “parents day.” It is at this point in the film that Lloyd delivers his inspirational speech, which he concludes by saying, “Just because you're smart doesn't mean you can't act stupid.” This statement turns out to be the movie's theme and should act as a nice consolation to all the smart people who spent good money on a ticket to see Camp Nowhere. 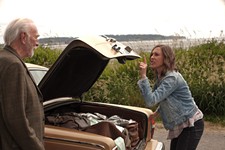 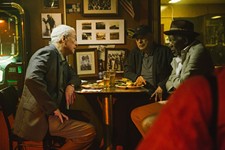