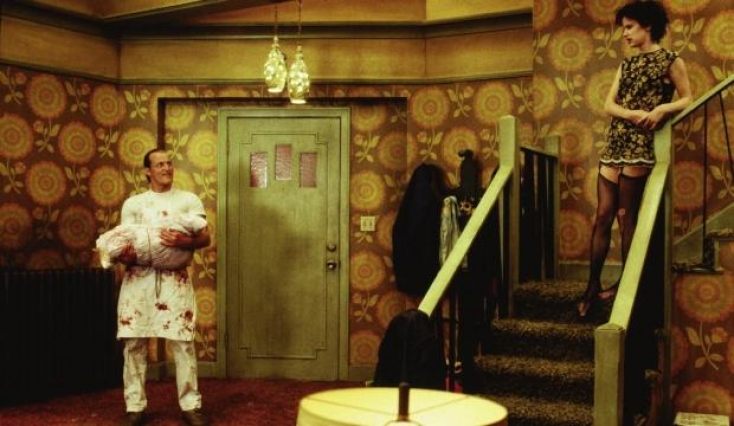 Berserk from the outset, Natural Born Killers lunges for our collective viscera in its opening sequence (surely one of the most brilliant establishing sequences of all time) and never lets go for the next two hours. Not only does this opening shockingly familiarize us with the abominable mayhem of which Mickey and Mallory Knox (Harrelson and Lewis) are capable, the sequence also flings us from our safe moorings and smack dab into the technical maelstrom used to advance and layer the story. Visually and thematically, NBK is the most audacious movie to come out of Hollywood in a long time and it may also rank as the best conceived and executed movie of Oliver Stone's career. Using cockeyed angles, cross-cutting between images as seen through a multiplicity of camera stocks and formats (35mm color, black-and-white video, secondary TV, and newspaper echoes), exaggerated caricatures, and hyperbolic acts of violence, the opening sequence introduces us to the technical frenzy that is yet to come. Rear and front projections, matte shots, morphing, animation, adjusted speeds, warped lighting, printing manipulations, and laugh tracks are just some of the effects used to augment the hyper-reality of this story and take us into the mindsets of its subjects. Like one of its spiritual forebears, A Clockwork Orange, NBK is divided into essentially two parts: Part 1 delineates the antiheroes' murderous sprees with all their random grotesqueries and perverse societal paybacks; Part 2 follows the characters' entrapment in systems of police and penal retaliation that are run by individuals even more deranged than the mass murderers themselves. Mickey and Mallory's remorselessness in the first half of the movie is countered by the despicability of the vultures they encounter in the second half. These range from the “not a peace officer” detective (Sizemore) whose attachment to these mass murderers is in itself pathological, the dim and ridiculous brute of a prison warden (Jones, in a performance so outlandish that he out-Tommy Lee's himself), the sleazy and amoral host (Downey) of a tabloid TV show American Maniacs who lures Mickey into a prison interview by telling him that his ratings have already surpassed Bundy and Gacy, though not Manson (to which Mickey replies: “Well, it's hard to beat the King”), and, of course, society-at-large which vaunts the lovers into superhero status.Harrelson and Lewis turn in spectacular performances at the film's core. Also, all the supporting performances are brilliantly outrageous and chilling, and the appearance of Rodney Dangerfield is nothing less than an absolute shocker. Music is also essential to the movie's structure is its use of music. The action is amplified by dozens of songs ranging from opera to Leonard Cohen, the Shangri-Las to Dr. Dre, Patsy Cline to Patti Smith, Nine Inch Nails to Lou Reed. The amount and selection of the music contributes heavily to NBK's success. Looking at the editing makes it understandable why Stone spent a full year in post-production, despite the fact that principal photography was shot in only a few weeks. With all these layers of meaning added on, it is also understandable that the original scriptwriter Quentin Tarantino (Reservoir Dogs, Pulp Fiction) wanted his name attached only to a story credit rather than the script. And despite all the razzle-dazzle of Stone's technique, meanings, and ultimate conclusions are often buried under this onslaught of style. Stone's typically fuzzy, apocalyptic visions have a real presence in his current movie and it might be said that NBK works best as a visceral rush rather than a plotted narrative. Subtlety has never been one of Stone's strengths so his movie about the excesses of mass murderers and mass media is hardly delicate. There is also an unnecessary coda that ties the fictional story to the bizarre media events of the last year and serves only to prove Stone's prescience and drive home the parallels for anyone who doesn't already get it. Certain to jumpstart the ongoing national debate about the relationship between violence and popular culture, NBK's humor and stunning presentation will, no doubt, be used as examples of gratuitous violence. Though the logic may sometimes be vague and impressionistic, Stone is earnest in his attempt to corral the big subject. Like one of the characters says: “It's a statement, though I'm not 100 percent sure what it's saying.”