In the Army Now

In his third starring role, Shore, the weasel who walks like a man, is cast as a goofball loser (there's a stretch) who joins the army reserves for the fast cash and then ends up in Chad, fighting Libyans and accidentally saving his comrades from certain death. A loose rip-off of the early-Eighties Bill Murray/Harold Ramis vehicle Stripes, director Petrie, Jr. (Toy Soldiers) apparently thought Shore could pull this one off by sheer wit alone (or maybe he lost bigtime in Vegas); either way, the film reeks, buhdeeeeee. Shore's comedic talent (or lack thereof) makes a powerful, lucid case for the immediate dismantling of MTV, seeing as how that mind-sapper shot Mitzi Shore's demon offspring to national fame to begin with. Genuinely talented performers like Petty, Grier, and Dick drop like flies when in close proximity to Shore's character. They fall by the wayside like so much roadkill, unable to keep up with the sheer mindlessness of the task at hand. Let's put it this way: it's a 90-minute comedy, and I laughed just once (the guy in front of me spilled popcorn on his whiny date, if you must know). Suffice to say never wear an Indiglo watch to a Pauly Shore film -- it's just too tempting to fiddle with it to pass the time. (Fans of Shore should be advised to stay away from my new Internet newsgroup, alt.paulyshore.die.die.die). 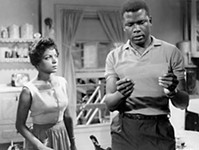 A Raisin in the Sun
The last film in the Millennium's monthlong festival is this intelligent screen adaptation of Lorraine Hansberry's groundbreaking play. A superlative cast vividly captures the turbulence ... 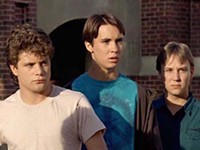 Toy Soldiers
Machine guns and adolescent boys -- oh hold me back. Honestly, no one expects me to like this kind of film, but they wrong me. ...