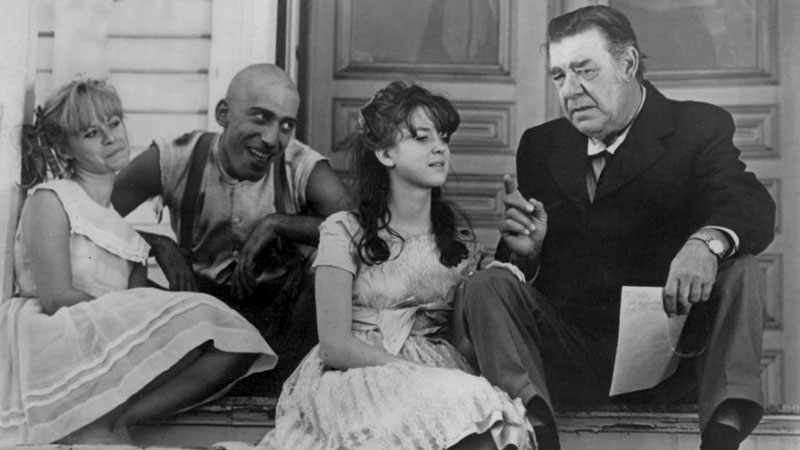 What a twisted web we weave.... Shot in 1964 but not officially released until four years later, Jack Hill's no-budget masterpiece of the weird is a genuinely creepy, kooky, ooky nightmare, involving a family so off the beaten path they make the Addamses look like the Cleavers. The venerable Chaney, Jr. is Bruno, the caretaker of the ghoulish Merrye brood, sworn to protect them all by old man Merrye on his deathbed. Apparently, they all suffer from “Merrye's Syndrome,” a degenerative mental and physical disease that, in time, will reduce them all to the status of cannibalistic cellar-dwellers (like the briefly-glimpsed Aunt Clara and Uncle Ned). There are the sisters Elizabeth (Washburn) and Virginia (Banner), a pair of neophyte necrophiliacs with a penchant for playing “Spider” and really, really long knives. Ralph (Haig), a bald, severely retarded adult, is already on his way to join his aunt and uncle, but he still finds time to caper about like a busted marionette, and, um, drool. When a long lost uncle and his shrewish wife and yammering lawyer show up one day to claim the house as their own, Bruno must try to keep the normalcy charade ticking along as long as possible. Any upset in the daily order of events at the Merrye household could mean another game of “Spider” (Mantan Moreland as the hapless postman has already fallen victim to Virginia's web) and another severed ear in a roll-top desk. Sound bizarre? It is, and wonderfully so. Spider Baby is a lost classic of the weird and outré; it's the kind of low budget Sixties shocker Roger Corman tried his hand at a few times before upscaling to his legendary AIP Poe series. But Corman never quite managed to get as far out as director Jack Hill (himself a Corman protegé). Simultaneously creepy and hilarious, this is the perfect slice of Grand Guignol for a humid summer's night. Now, if someone would just open up a drive-in around here.

From the Vaults: 'Spider Baby'
A restored print of 'the maddest movie ever told' screens Sunday 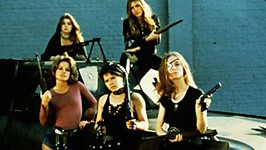 Switchblade Sisters
This nifty little movie is full of all the lurid teases, off-the-cuff production values, and trenchant topicality that make exploitation movies the fascinating cultural time capsules they are.