It Could Happen to You

Generous to a fault. That's what the makers of this endearing comedy want us to believe its two lead characters are: a courageous, helpful, Big Apple cop who splits his $4 million lottery win with a waitress he shorted on a tip, and the waitress, who buys a restaurant with the “tip” but keeps a table in it to serve free meals to folks without cash. And you know, you can buy it, because it seems everyone involved with the film has given themselves over to it, as if this tale of giving inspired them to be generous, too. It Could Happen to You is a tribute to old-fashioned virtue and is shamelessly old-fashioned in its feel. The characters are like the decent, honest folk in the movies of yore and the sweet, simple performances of Cage and Fonda echo the work of earlier stars, say, Gary Cooper and Carole Lombard. The soundtrack swirls with romantic standards -- “Always,” “Now It Can Be Told,” “Young at Heart” (from which the film takes its title) -- that glow like brandy as crooned by Tony Bennett. And the finale is a valentine to the heart of “the little people” with all the populism and sentiment of Capra's best. Screenwriter Jane Anderson and director Bergman sell the story as a fairy tale, with an opening shot -- sheets drying on a line which are taken down to reveal a gorgeous Manhattan skyline -- that's like a curtain being drawn on a play about a magical city, and a seemingly omniscient narrator (Isaac Hayes, deep and mellow) who guides us through the film like a granddad through a bedtime yarn. This open appeal to see the story as a fantasy will help some viewers curb their Nineties cynicism and accept it. But I prefer to see the story as an affirmation that virtue lives, that generosity and decency thrive. You see it whenever a tragedy hits the news and people dash off checks, drop cash or goods in the mail, or pass along expressions of sympathy and encouragement to their fellows in need. And if you stay through the closing credits, you'll see that the film was inspired by the true life generosity of Detective Robert Cunningham and his wife Gina. Sure, Rosie Perez's greedy Muriel is a cartoon and her voice, always at full drill-bit whine, is wearing, but the warmth and graciousness apparent in every frame keep this movie touching and sweet. Give yourself over to this giving film and see what happens. 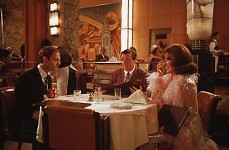