Coming Out Under Fire

Coming Out Under Fire is a 71-minute-long documentary about homosexuality in the U.S. military during World War II. The research is based on a book of the same title by Allan Bérubé, who co-wrote the script with director Dong. The movie is bookended by contemporary segments of the recent Congressional hearings about gays in the military that highlight the ongoing hypocrisy of the “don't ask, don't tell” policy that continues to keep the closet door latched shut. Shot in black-and-white, the film is structured with clips of archival footage, old photographs, newsreels, and training films. Yet it is mostly a “talking heads” documentary organized around recently recorded interviews with nine gay and lesbian veterans who served during this wartime period. Some left the military with honorable discharges, others were “found out” during the witch hunts of the later war years and the Eisenhower period and dishonorably discharged. What their testimonies provide is a unique oral history of an active but hidden subculture and the rules for survival. Clearly there was more open tolerance in the early war years than in the later years and the post-war period when troop strength had swollen to capacity and the freedom to weed out undesirables was more rampant. The stories these veterans tell are enlightening and amusing: stories of drag shows and undetected love affairs and a mimeographed newsletter called The Myrtle Beach Bitch. All seem to have been motivated to join up in order to fight fascism. One of the women speaks of the freedom she found from the constraints of femininity in the wearing of the military uniform. Once the homosexual purges began, the stories take a more sour turn and tell of courtmartials, the “queer stockades,” and the dishonorable discharges that led to denial of veterans' benefits and pensions. Coming Out Under Fire, apart from providing an oral document, is a movie with a point to make about the ongoing mistreatment of gays in the military. While the existence of abuse and inequality are intolerable within any democratic institution, the military -- with its entire existence predicated on the abdication of individuality -- is arguably one of the least likely organizations to grant freedom of sexual identity. Still, if the military is the thing that puts the starch in one's step, then its leadership is foolish to ambush its most loyal recruits. 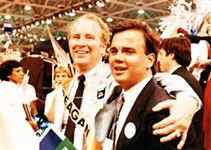 Coming Out Under Fire, Arthur Dong