Where the Rivers Flow North

The basic story is a familiar one: people fighting to protect their land and their established way of life from the encroachments of “progress” and modern civilization. Set in the backwoods of Vermont in 1927, Where the Rivers Flow North is adapted from a regional novella by Howard Frank Mosher. It tells the story of an unlikely pair: Noel Lord (Torn), an aging log driver with flowing gray hair, a crusty temperament, and a hook for a hand, and Bangor (Cardinal), Lord's housekeeper/companion/lover over the decades, who wears men's clothing, refers to herself in third person, and calls Lord “mister.” She is also missing a front tooth and is slightly but indefinably daft. The drama evolves as the power company tries to buy up Lord's land and chop down all the trees in order to build a hydroelectric dam. Yet lack of drama is the essential problem with this beautifully shot, low-budget independent film. The film builds little tension and constructs sequences flaccidly, relying too heavily on our familiarity with these stock homesteader-developer conflicts and inserting one-note stereotypes in the villainous roles (Fox, Raymond). What the drama's weakness leaves us with, however, is a blessing. The strength of the movie is the character studies of Lord and Bangor. And here, Torn and Cardinal do things up right. Both actors get inside these rare and indomitable characters and generate some real memorable material. The longevity of the pair's quirky relationship is thoroughly believable yet its contours are conveyed through the subtleties of their interactions rather than emotive and explanatory speeches. In some ways, Where the Rivers Flow North echoes an earlier independent homesteader/romance/new frontier film, Heartland (which also starred Rip Torn). Both movies place an uncommon female character at the center of their stories. Cardinal's Bangor is likely to strike you as one of the most unusual women you've ever seen in a movie. This independent backwoods Indian survivor is a simultaneous study in coarseness and grace, peppered with enough oddities and quirks to make Bangor a singular character. Cardinal has previously played roles in Dances With Wolves and Sam Shepard's Silent Tongue. Though her performances have always been outstanding, Bangor is, potentially, the role that could launch Cardinal into much-deserved prominence. 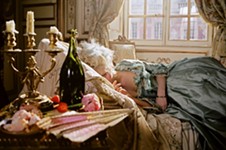