Bank teller Stanley Ipkiss (Carrey) is one of the nicest guys in the world, but he probably couldn't get a date to save his life. Pondering his fate after being unceremoniously tossed out of the swanky Coco Bongo nightclub, he spies what appears to be a body floating in the river. With a cry of, “Hang on mister, I know CPR,” he dives into the murky water only to discover that the “body” is merely a waterlogged collection of river detritus with a battered wooden mask as its head. Dejected, Stanley takes the mask on impulse and returns to the one-room walk-up he shares with his terrier Milo. That night, he playfully tries on the mask and, suddenly, he's transformed into a green-skinned, zoot-suited creature of the Id, a walking, talking cross between Warner Bros.' Tasmanian Devil and any number of Tex Avery characters. No longer mild-mannered Stanley Ipkiss, he's now The Mask. Based on the Dark Horse comic, the character of The Mask is part Batman, part Saturday morning cartoon, and part Three Stooges. Carrey is excellent, both as the shy Ipkiss and his outrageous alter-ego, but director Russell has a hard time deciding if he wants to play the whole thing up for laughs or go straight into superhero mode. At times wildly entertaining and hilarious, Russell's film also tends to feel palpably confused (not a hard thing to do in a film that includes a musical number straight out of Steven Bochco's failed Cop Rock TV show) and weak, especially when it comes to the various subplots involving the witless cops and paper-thin crooks who are after the mysterious Mask. Carrey has always been an odd performer, what with his naturally elastic facial features and the manic, almost psychopathic energy that he obviously has bottled up inside him, but that works to his advantage in a film like this: portraying a living, breathing cartoon character is a natural for him, even if quiet romantic interludes aren't. The best things about The Mask are, naturally, the splendid, Tex Avery-inspired computer effects courtesy of George Lucas' Industrial Light and Magic; it's no secret that even people who despised Carrey's turn as Ace Ventura: Pet Detective will be swayed into seeing this newest offering just to catch a glimpse of ILM's outlandish creations. Carrey has yet to find the perfect vehicle for himself, but The Mask, while hardly as fantastic as it should have been, is a step in the right direction. 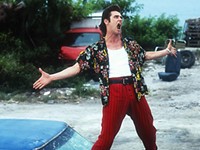