The longtime producer/co-conspirator of James Ivory's films (Howards End, Mr. & Mrs. Bridge, Remains of the Day) takes the helm and directs this intriguing, philosophical look at India's dying language of Urdu. Puri is Deven, a linguistics professor and student of Urdu who is asked by a magazine editor to attempt an interview with the reclusive Nur (Kapoor), an obese, bespectacled poet of Urdu, considered by some to be a national treasure. As Merchant's film progresses, Deven finds himself not only in custody of the drunken, barely-there Nur, but also of many of Nur's fabled poems. On a whim (the original interview turns out to be a drunken ramble, thanks to Nur's rum-besotted fan club who show up at every turn, hoping for a reading and a bite to eat), Deven manages to badger his university into doling out money for a video camera to tape the failing poet for posterity. What he ends up getting is a broken-down Sony reel-to-reel audio deck and a 15-year-old “sound engineer” with the flimsiest of credentials, but then, nothing ever seems to go right for poor Deven. As a directorial debut, In Custody is obviously a labor of love for Mr. Merchant: his passion for Urdu (and, occasionally, Keats as well) fills the frame, and his skill as a director is on full view. He crams as much as he can into every frame, whether it's simple long shots of the Indian countryside or crowded, dusty interiors featuring the charismatic Nur and his nagging wife (who feels cheated by her husband's fame). Based on the book by Anita Desai, In Custody lacks the lauded-gentry feel of James Ivory's lavish period productions, but more than makes up for it by fully brimming over with heartfelt passion and honesty. 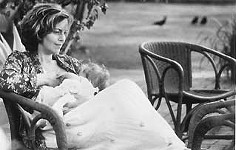 Cotton Mary
Like a premium Courvoisier label slapped on a 40 of Olde English 800, Cotton Mary's tastefully burnished Merchant-Ivory packaging adds a patina of class without ...