One of the blurbs for City Slickers II, from Patty Spitier of WISH-TV, Indianapolis, proclaims this “The best sequel since The Godfather.” In the real world, however, City Slickers II is “the best sequel since Look Who's Talking Now,” if you get my drift and I think you do. Crystal and the gang once again head out to the Old West (this time with Jon Lovitz in tow) in search of $10 million in gold bricks supposedly left lying around the Nevada desert by Curly's train-robbing father. (Curly, you will remember, was Jack Palance's cowboy character who passed away in the first film.) Mitch (Crystal) has just turned forty, and as if that wasn't enough to deal with, he's been having nightmares about the possibility of Curly having been buried alive. Soon, he starts seeing the gnarled cowpoke around town. When he finds a treasure map in Curly's hat band, it's off to find the wizard and strike it rich in the dusty, arid west (again). Like a set of retreads on a '64 Ford pickup truck (the kind that's already 90% gray primer to begin with), City Slickers II feels like a bum ride. Crystal and Stern toss out the same tired, mid-life crisis homilies we heard last time, and with Lovitz's familiar whine riding roughshod over the Billy Crystal/Lowell Ganz/Babaloo Mandel script, it's enough to make you give up westerns altogether. Director Weiland has a sure hand in the Western Sunset department, but by now, who doesn't? Only Palance is worthwhile, as Curly's long-lost brother Duke (there's an inspired cowboy name for ya), and even that role seems dazed and clichéd. Tack on an absolutely deranged, hackneyed final reel, and you've got a movie that'll fade from your memory so quick it'll make your eyes water and your teeth hurt. Thankfully, the filmmakers leave us with an open ending so they can redeem themselves with a brilliant and electrifying third installment. (Yeah, right, and Jack Palance might fly out of my butt.) 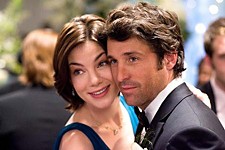 Made of Honor
Heart-on-the-sleeve sweets mix with pure raunch as Dr. McDreamy stars in this mean-spirited and uncomfortably blue romantic comedy.